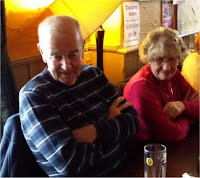 Yesterday started with depressing news. So did today. A friend's mother died yesterday. She'd not been well for a few months and she passed away yesterday.
I found myself thinking about this particular death. I've known this family for over forty years. They have always been particularly religious and regular church-goers. Their religion specifically states that death is*not* the end. Is their religion a comfort at times like this? Having been a religious nut in my youth and having then "seen the darkness" in retrospect I am surprised at just how many people don't get any comfort from their so-called beleifs in the darkest hours.

I spent a little while listening to the rain outside whilst solving virtual geo-puzzles. Virtual geo-puzzles are incredibly rare; a series of the things is even rarer. There is a series of seven in London; I solved six of eight this morning and then I took Fudge round the block. Sid didn't want to go so I left him behind. For all that he really should go for a walk I can't help but feel that I'm in some way bullying him in forcing him out.

With one dog walked "Daddies Little Angel TM" and "Stormageddon - Bringer of Destruction TM" arrived and they came with me down to Hastings; "er indoors TM" followed with Cheryl and Lacey. We were soon at the Hollington Oak where the tribe gathered for a little celebration. It will be my Dad's eightieth birthday in a day or so.
An excellent meal with all the family together. And there are quite a few of us I took a few photos whilst we were out.

We came home via Brittania Lane; "Daddies Little Angel TM" wanted me to collect a table as we had the car handy. And then on to Beaver Court for a microwave. We took them to her new flat (which is quite good) and then drove out to the back of beyond to get a gas cooker. Having broken our backs getting the gas cooker into the new flat we then filled the car with most (but not all) of the rest of her stuff from the temporary accommodation.

I finally got to sit down in front of the telly about four hours later than I had been planning. I shall iron my shirts another time...