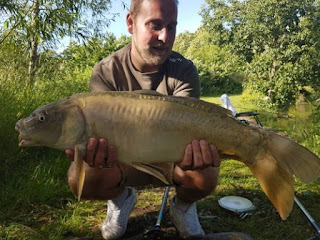 I had something of a restless night mainly because the dogs had a restless night.
Over first brekkie I watched the start of an old episode of “Dad’s Army” but having seen it so many times I knew exactly what was going to happen so I turned it off and set off to collect "My Boy TM".
We were at McDonalds having a sausage and egg McMuffin (and a toffee latte) shortly after 6am and once we’d scoffed we set off towards Tenterden.

In retrospect I have no idea why we went to Tenterden. I should know that the first fruit of my loin isn’t the world’s best geographer. Eventually we ended up not far from Cranbrook having taken the seriously scenic route t get there.
We unloaded all the fishing tackle and lugged it half way round the lake to where we soon set up. Today we tried a different style of fishing; we floated dog biscuits on the surface of the lake and watched for the fish to take them. Before today my biggest carp was six pounds in weight. I soon had an eight pounder, and half an hour later I had a nine pounder. By 10am I had caught one over ten pounds in weight.

By mid-day the wind direction had changed so that we could hardly see our floating dog biscuit baits because of the ripples, so we relocated. We were in a more scenic place to fish, but the overhanging trees did take their toll on floats, hooks and assorted equipment which is now twenty feet up in various branches.
"My Boy TM" then caught the biggest fish of the day…
We soon both lost count of the number of fish we’d had. Probably nowhere near as many as we have had on days at Shirkoak, but far bigger fish. By late afternoon my elbow was incredibly painful. We packed up about an hour earlier than we might have done, but used the time constructively.

Hartley Lands Farm Fishery has recently been taken over by new management, and we thought we’d have a wander round the complex. The lake we fished in was very good; we found four other lakes in various stages of construction. They looked good, but will look far better when finished. It was only a shame that the four proto-lakes were awash with goose shit.

We then came home in a rather smelly car. We are used to coming home smelling of fish, but today’s journey home had a certain je ne sais quoi about it. We eventually found it was all the goose shit we’d trodden in.

Once home I got out of the fishy clothes and had a rather good bit of scoff then uploaded the photos I’d taken while fishing.
Charlotte then arrived. She’s taken over from me as secretary of the astro club, and wanted a formal hand-over even though there wasn’t really anything to hand over. We ended up having a rather good evening putting the world to rights whilst playing with puppy.

And it would seem the election results are in. Something of a disaster for everyone. Far from getting the landslide victory for which the Prime Minister had been hoping we’ve ended up with a hung parliament with no one party having a clear majority.
Word is the Conservatives are going to carry on pretty much as they have been with the Democratic Unionist Party (who?) bailing then out as need arises.
This hardly seems practical…