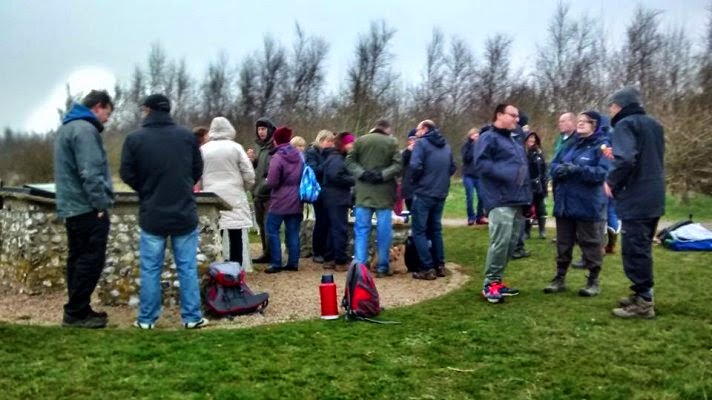 Sunrise this morning was (about) two hours before the end of my shift. Realistically the breaking dawn did little more than to show me the cloud that I suspected would be in the way of seeing the sun. Overnight (as always) I'd had the radio on; at least once every half-hour the pundits had proclaimed that the long-awaited solar eclipse was going to be hidden by clouds. I've said before that astronomy is a crap hobby. Most of the time it's too cloudy to see anything; and if you ever get that rare occassion when there is no cloud, then it's chuffing freezing.
But bearing in mind that I wouldn't get the chance to see another solar eclipse for many years I decided to go with the plan; the cloud might clear. After all, I had the astro club's solar telescope in the back of the car in readiness. And there was a geo-meet arranged especially for the event.
I *might* get to see a once-in-a-lifetime event. If nothing else I could talk tupperware-hunting with other geocachers and maybe drum up some interest for tomorrow's "Stargazing Live" show.

I was glad I did go to the geo-meet. For all that the clouds didn't part and we didn't get to see the eclipse, it was an excellent meet-up. I chatted with loads of people about this and that. Several people said very nice things about my Wherigos (I got *very* smug), and I now have ideas for two more Wherigos. Bacon rolls were provided for the hungry; and we even streamed live footage of the eclipse from the BBC who had goone to where it wasn't quite so cloudy.
Just as we were all leaving and making plans to see one another at the next meet-up, the family with whom I'd been talking asked about the next meet. Specifiically what was it?
After a little confusion and explanation it tuurned out that this family weren't geocachers at all. They were a little embarrassed to say that they'd seen me shouting at another cacher in the car park when I'd arrived, and they thought I might be important. So they'd followed me and watched me being very noisy at what seemed to be an organised group (which confirmed their suspicions). They were impressed with the solar scope that I'd set up (even if we didn't use it) and everyone seemed to be friendly, so they just joined in.
They liked the sound of geocaching, and said they might take it up.

I could have gone on from the meet to a caching mission; the optionn was there. People were going hunting tupperware. But I was a bit tired, so I came home. I walked "Furry Face TM" round the park, and then had a crafty kip. I'd only intended an hour or so's shut-eye; I was out like a light until the phone woke me shortly after 4pm. I slobbed about watching "Upstairs Downstairs" in my jim-jams for a bit, then got ready for the evening.

Apologies to any of my loyal readers who would have liked a game of cards tonight. Realisitically we can't have more than nine people playing as it gets impractical. I could easily think of thwenty five people I could have asked along. I invited eight other people based on relative proximity and how much people like cards, and the probability that they would turn up; and did ask that if people couldn't make it they might let me know so's I could ask others.
Eight of us eventually got round to Texas-ing and Omaha-ing; and in a novel break with past form I actually won. Whilst doing so I shifted getting on for a gallon of ale, and the Rear Admiral put his arse through one of the chairs.
There was a time when I would play cards on a weekly basis; I do like a game. I really should play it more often...