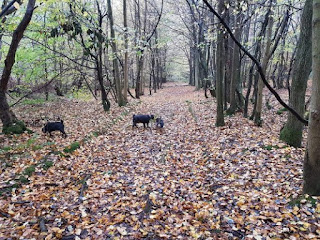 My phone rang with a very distinctive ring tone at twenty past four this morning. It was "Daddy’s Little Angel TM" – could I collect her from the local hospital? Had it been the first fruit of my loin I would have declared “Red Alert” and panic, but (much as I was very worried) I must admit I set off with an air of “what is it this time?”

It was a very foggy dark night; I nearly ran over a cyclist. I screamed at him (at half past four – probably waking the neighbourhood) demanding to know which flavour of half-wit cycles in the fog in the middle of the night dressed entirely in black with no lights on his bike (that’s not “lights with flat batteries”, that’s “no lights at all”). He replied with a half-hearted “f… off” but I think he realised what an idiot he was. On reflection I think I asked a valid question.

I got to the hospital only a quarter of an hour after I’d been summoned and found the most recent fruit of my loin loitering outside. She was in fine spirits. Apparently whilst enjoying a cup of tea at some stage yesterday evening "Daddy’s Little Angel TM" had inhaled it (rather than drunk it) and nearly drowned in it. The nice people at the hospital feel that most (but not all) of the tea had come out of her lungs and had given her antibiotics just to be sure that she didn’t develop pneumonia.

We put the world to rights as we drove through thick fog to Folkestone. I deposited her at her flat, came home, and I had just fallen asleep when she phoned me to see if I’d got home safely.

I then lay awake for an hour or so.

I made myself some toast and peered into the Internet. I’d had a flurry of “likes” and comments on the pictures of beach and Lego that I’d posted yesterday, but there wasn’t much on Facebook this morning. Had everyone really done nothing over the weekend? I wonder if there is a reason for so few people posting – a friend posted some meme the other day about not checking in to places on Facebook because that tells burglars that you are out. Seriously? I couldn’t possibly imagine anyone on my Facebook friends list taking a jemmy to my back door. What kinds of “friends” do some people have?

Fudge was clearly asking to go out (dogs really do ask to go out) so I took the hounds to Orlestone Woods. We had a (mostly) good walk. Fudge did straggle a bit, but that’s the whole idea of going to the woods. Lots to see and lots to sniff at.

We did meet one other person and her dog. I could see there was the possibility for disaster as she put her dog onto the lead when two hundred yards distant so I blew the whistle and got my lot together and leaded them up. We passed without physical harm, but the tiny little woman was being dragged about by one of the biggest Alsatians that you ever did see. Why do so many small people have such huge dogs? This woman was using all of her might and was barely managing to force the dog to follow her. My hounds are no angels, but at the end of the day I am stronger than they are (mind you it comes close with Pogo).

We came home; I popped up the road to the corner shop for a sandwich for overnight and pastries for morning coffee, then settled down with my lap-top as the dogs snored around me.

I deployed Munzees, then tried to contact the power company. Two weeks ago they told me that my “smart meter are giving us the incorrect reads and it seems that your smart meter need to be commissioned”. Someone was going to contact me in a day or so. No one has been in touch. But this morning their live chat thingy wasn’t working. Ho hum… So I wrote up a little CPD until mid-day. When I went to bed.

I stayed in bed for four hours despite two Amazon deliveries and a DPD (I think) pick-up, all of which were announced by a flurry of barking. And Treacle tried to wake me because she wanted to go bother the rats.

I’m still tired from last Friday’s night shift – and now I am off to another…
Posted by Manky Badger at 5:48 pm