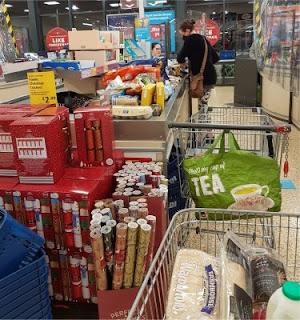 Treacle had another restless night. Whilst she stayed on the bed this time, she spent much of the night stomping round it. It is odd how at night dogs don’t walk but they stomp. Eventually I pulled her legs out from underneath her and forced her to lay down. She was then fast asleep in seconds. Obviously tired; why didn’t she just settle down herself?

I came downstairs a tad earlier than I might have done, cleared up one errant turd, and chased Sid into the garden. I made brekkie and watched an episode of “Time Gentlemen Please” before sparking up the lap-top. The Munzee clan war started this morning so I got jiggy with the ongoing virtual reindeer near Sevenoaks, and captured a jellyfish and a platypus-thingy in the garden. Over the next few weeks I’ve got to send out some virtual greetings cards and capture places, weapons and flat friends. All a good bit of silliness, but seeing how the thing is all recorded on-line there isn’t the scope for the bending the rules that is causing consternation in the geo-community at the moment.

There was also a squabble kicking off on one of the Facebook groups about Lego trains. Someone had posted a video of their Lego train layout. I quite liked the video, but then I like Lego. Unfortunately the first comment under the video read “I don’t find this video particularly interesting” and all hell had broken loose. As is always the way, the one who had written “I don’t find this video particularly interesting” was full of opinion, but rather light on actually contributing anything to that about which the squabble was over.

I had quite a few emails telling me that people had found the geocaches that I’d hidden out in the sticks and in Kings Wood. That was encouraging. And with little else of note I got ready for work.

As I drove to work through a very wet morning the pundits on the radio were talking about today's Presidential election in America. With the predicted demise of Donald Trump, many shops and offices in America have closed for the day and boarded up their premises expecting civil unrest. The National Guard has been mobilized too as vigilante groups are expected to take to the streets. If Donald Trump loses the election will he just declare himself dictator for life claiming that the election was rigged by the namby-pamby tree-hugging lefties? From what I can make out there are a lot​ of people who would support him.

There was also talk of the upcoming Lockdown II. The Labour party's shadow chancellor was interviewed. As members of the shadow cabinet so often do, she waxed loquacious about how crap the government is whilst offering absolutely no suggestions of her own. Perhaps if the Labour party ever suggested anything plausible then they might stand a chance of getting elected. Or perhaps they know that very well, and so make a point of never suggesting anything plausible.

Work was rather busy today. What with one thing and another I was an hour and a half late getting out this evening. So much for an early shift.

I came home via Aldi. "er indoors TM" had given me a shopping list.

I prefer going there in the morning before work when the “less problematical element” are still in bed. But that makes getting perishables somewhat tricky. Today seemed to have been “take your frankly obnoxious brat shopping day”. Did the snotty six year-olds *really* need to be climbing on the shelves. And has Monica’s mummy never considered the merits of a slapped arse?