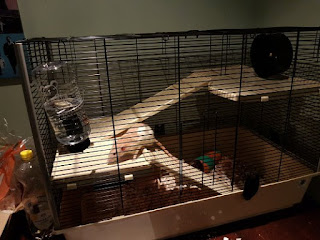 The night shift was busier than I would have liked it, but I'm not complaining. As I drove home the pundits on the radio were talking about how President-elect Joe Biden is being seen as the last hope for the struggling Brexit negotiations. Personally I don’t see how. He doesn’t take office until three weeks after the deadline for getting it all sorted. In any case, the UK voted for Brexit, and part of that is the closure of the border between Northern Ireland and the Irish republic. And after years of strife the Good Friday agreements were clear that there would be no border checks between Northern Ireland and the Irish republic. Brexit and the Good Friday agreements are mutually exclusive. I must admit to a degree of amazement here. Did no one *really* not see this one coming?
And soon-to-be-ex-President Trump is starting his legal campaign to have the American election declared null and void. He must be either incredibly arrogant or incredibly stupid. It is interesting how over the course of a week he has gone from being a figure of ridicule to a figure of pity.
There was also concern expressed that over lock-down, many nursery-aged children have regressed. Some have supposedly lost the ability to use a knife and fork, and some now apparently need nappies where once they didn’t. I can’t help but wonder if this is true, or if someone has suddenly realised how late many children develop. As a cub scout leader we used to find every year that about a third of eight year-olds couldn’t use a knife and fork and that about a quarter of them had little (if any) bladder control.

Once home I took the dogs down to the woods where we had a good walk. It was rather muddy, and Fudge did straggle somewhat. But we walked for nearly two miles (I think that’s the distance – I must measure it!) and only met one other group. And that group was the chap with two red setters who doesn’t mind that Pogo barks at him.

Whilst we were out Pogo also barked at nothing. He spent at least five minutes randomly barking into thin air for no reason that I could fathom. Eventually I went and dragged him onward.

I wonder what had rattled him?

I went to bed for a while, eventually being woken by the commotion that goes hand-in-hand with every time the doorbell rings.

Over a lunch of hot cross buns I peered into the Internet. Not much had happened whilst I’d been snoozing. So with a little time on my hands I rather amazed myself by adding links from Blogger to my Untappd and Vivino accounts, so if anyone wants to know what I’ve been drinking recently feel free to click on either of the links to the right of the blog entries (this won’t work if you are reading from the backup blog website – if you are, have a look here). After all, I do like to record what I’ve done; if only to have "Stormageddon - Bringer of Destruction TM" roll his eyes in despair at some point in the future.

I spent the afternoon ironing and watching episodes of “Time Gentlemen Please”, then once "er indoors TM" had done with work for the day we built the new rat house. The old one was fine, but we both felt it was a bit small.
I never wanted dogs; I certainly never wanted rats. But they are both (all) rather sweet little things.