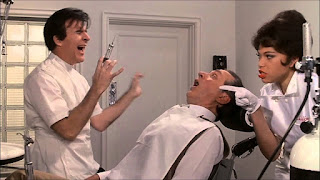 I did have a vague plan to take the dogs out really early this morning. But I slept rather later than usual and woke to find it was pouring with rain, so I thought better of that idea.

I phoned the dentist only to get their answering machine. Last night a back tooth snapped in half. Their website claimed that they opened at eight o’clock; the overnight answering machine was still in action at ten past eight. I eventually gave up on phoning after the thirty-second phone call and walked down the road to the dentist. I knocked on the door and some young girl told me I had to have an appointment. I asked how I would get one of them bearing in mind that their answer machine was on. She said she’d turn it off. I asked if she wanted me to phone from their door-step; she simpered.

So I phoned for a thirty-third time and got a different recorded message. Interestingly this one gave contact details for an out-of-ours service which the other one didn’t. You would think that the details of the emergency twenty-four hour dentist would be on the message they have on at night, wouldn’t you? Had I known of an out-of-hours dental service I would have phoned it. However the answer machine I got last night just said to phone NHS 111.

Eventually I navigated their “press 1 – press 2” labyrinth and got to speak to the receptionist who pretended not to see me staring at her through the window from five yards away. She came up with an appointment for ten past nine, so I went home for half an hour.

I went back down the road and waited outside the dentist’s for five minutes until someone had the good grace to open the door. As I was waiting I was chatting with another chap who was waiting to go in. He told me he’d recently moved to Ashford, he’d not been a patient with that dentist for long, and how he thought he made a mistake signing up with them.

Once in I had the embarrassing ritual of all the COVID-19 testing and questioning whilst all the reception staff wore their face masks as neck warmers. Unlike on my last visit I was allowed to keep hold of my wallet and phone, and I was soon siting in the dentist’s chair. He had one look inside my gob, told me that one of my back teeth had cracked in two, and that it had to come out. Was I free today?

I told him that I was. He called up his diary and told me that he would pull the tooth at half past eleven. I should come back then, and on my way out I should tell the receptionist that I would be back.

Seeing that the rain had stopped, and having a couple of hours to kill I took the dogs down to the woods. There were a lot more cars in the car park than usual, but Orlestone Woods is a big place, and much of our standard walk takes us along some of the smaller paths that most people avoid.

We met one young woman with two spaniels who barked at us. She was mortified and so apologetic and was incredibly relieved to find that I really didn’t mind being barked at. We got chatting; her dogs are just like Pogo and Treacle. It had never occurred to her that the noisier one was sticking up for the quieter one.

We had a good walk, but the overnight rain hadn’t gone unnoticed. We came home and did bath-dogs as they were filthy.

I made "er indoors TM" a cuppa, then looked over the road. The parking bay outside our house was still empty apart from not-so-nice-next-door’s car, and the hole in the other side of the road was devoid of any activity. I’ve seen this happen up our road before. There is little co-ordination between the gang that digs the hole and the gang that does the fixing. So a hole can be dug and left open for several days before any fixing gets done.

And then I went back to the dentist. The receptionist wanted to do all the COVID-19 questionnaire again. I assured her that nothing had changed in the last two hours, and there was then a mini-conference behind the reception desk. Four secretaries (all wearing face masks as neck warmers) decided that their new policy was that the questionnaire only needed to be filled out once a day. I would have thought that some sort of expert opinion might have been useful in the decision-making process, but what do I know,

I got called in to see the dentist. He gave me some injections, and after twenty minutes of rather nasty crunching sounds he announced the tooth was mostly out. One of the roots was fused into my jaw-bone, but that shouldn’t be an issue. If it is problematical he can refer me to the hospital where they can cut into the bone under general anaesthetic. I didn’t like the sound of that, and said I thought I might just see how it goes. Something similar was suggested on previous extractions and all turned out well. In the meantime the dentist has told me that if it gives me any gyp I am to go back to see him regardless of what the receptionists say.

My dental surgery is odd… the reception staff and the organisation are lacking (to say the least) but the dentist himself is good, and being just down the road makes it rather convenient. And trying to change dentist with all the COVID-19 stuff going on would be rather tricky.

I came home and took myself off to bed where I dozed for five hours. I would have slept better had the dogs not been barking like things possessed for much of the afternoon. I wish they wouldn’t do that.

I’m off to the night shift soon. I did think about phoning work to tell that about my (ex) tooth and try to pull a sickie, but I’m doing tonight to cover someone else who couldn’t do it…