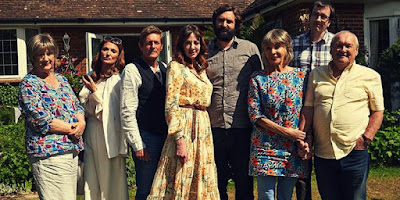 As I looked at the internet this morning I saw an advert for “Black Friday” deals. This “Black Friday” thing was all the rage over the last few years but people have got so over-excited about the thing that it was to be somewhat scaled back this year. Which would probably be for the best… but with a week to go the advert have started.

I took the dogs out rather earlier than I would usually do this morning. As we went Pogo barked at everything and anything. I wish he wouldn’t. He doesn’t do *anything* wrong when "er indoors TM" takes his lead, but he plays me up so much. I’ve been watching the “Dog Whisperer” programs on the telly, but it’s hard to try to do the special tricks with him when I’ve got two other dogs in tow.
Fudge was also less than angelic today; enthusiastically humping several other passing dogs.
We went round the park, and come home through the co-op field. Realistically I should stop walking through there until the spring; it is becoming quite a quagmire.

I then drove up to the town centre. It’s three weeks since I was at the hospital for the double vision. It has cleared up (mostly) but still recurs after having been reading my Kindle app for fifteen minutes or so.
I thought I would give SpecSavers one last chance to sort it out, and I very nearly walked out right away. I was seen by someone who introduced herself as a trainee. But (to be fair) once she realised my circumstances she went off and got the boss. Having checked the glasses three weeks ago, today they checked my eyes today. Had the person who tested me two months ago got the prescription right? It turned out she had, and after quite a bit of fiddling about it turns out there is still some residual weakness in my eye muscles from where they were strained when the glasses weren’t fitted right. The optician assured me it would get better with time, and to be fair to him they are improving.
Mind you, to be fair to myself, my next eye test will be with a proper optician.

I came home. Earlier in the week I’d shut the garden pond down for the winter. So this morning I cleaned out the filter so that when I start it again in the spring it will be clean and fresh and not full of fish dung that has sat there all winter.
Cleaning out the pond filter sounds such an easy thing to do. And it is. It just takes an age and smells of fish dung.

I had a croissant and a cup of coffee, and took myself off to bed for the afternoon. I didn’t sleep that well really. Pogo came up and slept on the bed with me, but Fudge and Treacle spent the afternoon shouting at passers-by.
I gave up trying to sleep, and then binge-watched the entire series of the new UK Gold comedy “The Cockfields”. It was better than I thought it would be; I expect it will be on a continuous loop on the telly from now on.