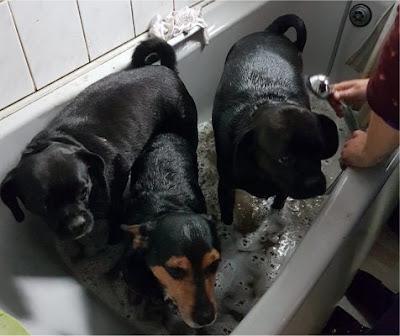 As I looked at Facebook over brekkie it reminded me that three years ago today I went to Tunbridge Wells for a job interview. I think that taking that job was perhaps one of the better decisions I’ve ever made.
I also had a message that I’ve been nominated to be on the committee of the Geocaching Association of Great Britain. I suppose they might well be a worthwhile bunch… I must admit I’m rather sceptical about them. I’ve only ever heard anything from them when someone from hundreds of miles away appears on the local Facebook page trying to get votes. Do I want to be on the committee? I’ve been on endless committees before; they are an ideal way to of avoiding making a decision by causing an argument.
And living in Kent is hardly an ideal location for being on a national committee. I posted on their forum (on which I was nominated) asking exactly what would be involved. As the day went on I got some wordy messages, but not one which actually said what they actually do.

We got the leads on to the dogs, and I drove us all down to Orlestone Woods. Not having driven for a week and having had iffy eyes I was a little daunted at the prospect, but all went well.
What I say “all went well” that was with the drive.
To be fair the walk went well. Very well. As is often the case in Orlestone Woods we didn’t meet anyone else. We had the place to ourselves, and the dogs had a great time. However when we were half-way round, the forecast rain hit. We got rather wet, and the dogs came home plastered in mud. Mind you, if nothing else it is a vindication of my entire “Boot Dogs” philosophy. The mess was contained in the boot.
We came home, and whilst "er indoors TM" conducted canine scrubbing, I nipped up the shop for almond croissants.

I scoffed my croissant with a cup of coffee whilst poring over two geo-puzzles that appeared on the map where (weather permitting) we are hoping to go for a walk tomorrow. After a couple of hours of brain strain (and one or two hints from the chap who set the puzzles) I worked out that the final location of neither puzzle cache is actually anywhere near where we are hoping to be going.

"er indoors TM" drove over to Margate to visit "Daddy’s Little Angel TM". I stayed at home with the dogs. I watched a few episodes of “Power”, then spent a little while researching the Geocaching Association of Great Britain. A lot of people seem to think it’s a good thing, but no one can explain what they actually do.

I fed the dogs, programmed “Hannah” for tomorrow, and watched some “Come Dine with Me” whilst the dogs barked at the fireworks.

"er indoors TM" will be home soon. I wonder what’s for dinner?