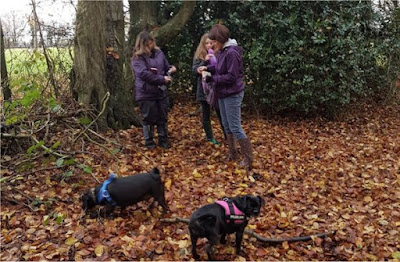 I slept well. Partly because a five-day week had worn me out, and partly because the dogs slept well.
I got up and tripped over Fudge who had made a nest out of an old duvet and had set himself up at the bottom of the attic stairs. I twisted my (already dodgy) back; he carried on snoring.

I made some toast; I had a look at Facebook. Unlike yesterday there wasn’t quite so much political stuff. There were a few knob jokes, and one or two posts from the works award ceremonies that took place last night. Every year NHS Trusts around the country have award ceremonies in which they celebrate the best people and teams, those who’ve gone the extra mile, those who’ve shown the most outstanding devotion to duty.
Personally I feel that this is an incredibly bad thing. Where I used to work had these awards and someone with whom I worked every day got an award for doing exactly the same thing that all of us did every day. But she was rewarded and we weren’t. By singling out one for praise, automatically all the others are sidelined. I thought about commenting on today’s posts with a little rant, but I’ve done so in the past to no avail.
I also had an email from the Geocaching Association of Great Britain. I was nominated for their committee a few weeks ago. I asked around to find out what they actually did and was totally unable to get an answer. This morning I was asked to vote in their committee elections. There were twelve candidates and I could vote for up to eight of them. I voted for one for the simple reason that I knew the chap.
I have no idea what is expected of him or what he might do… but that is democracy for you.

I activated my new credit card (that took some doing!) and started getting ready for the off. It wasn’t long before we met up with Karl, Tracey and Charlotte in Challlock, We had a little walk following the series of geocaches I set out (in a Wherigo) a couple of months ago. Despite the rather wet terrain we had a good walk. Admittedly Fudge did disappear for a little while, and pulling two-thirds of a dead mouse out of Pogo’s gullet wasn’t nice, but we rose above such inconvenience.
And with walk walked we went back to the Red Lion at Badlesmere for lunch. "er indoors TM" had missed out last week. Lunch there was rather good.
And I took a few photos too.

We came home, settled the dogs, and popped out to visit "Daddy’s Little Angel TM". We took her a McMilkShake, and after a little while came home.
"er indoors TM" boiled up omelettes; after a rather good dinner earlier neither of us were that hungry. We scoffed whilst watching an episode of “Junior Bake-Off”. I do like that show. So many talented children…