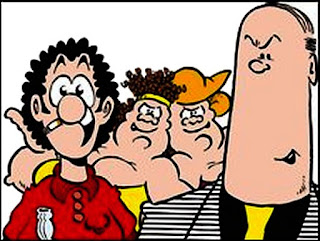 I didn’t sleep well last night. What with phone calls in the small hours and Treacle upsetting Pogo by sleeping on his head I think Fudge had the right idea by dossing down on the sofa.
As I scoffed toast so Fudge asked to go out. I much prefer that he goes for a tiddle on his own; when all three go out it becomes a silly game of charging round the house and garden barking at each other.  But as I unlocked the door Pogo clearly heard the sound and ran downstairs shouting as he came.

I had a little look at the Internet. One of the lakes at Hartley Lands fishery had been netted recently. Despite the lake having been drained two years ago and only carp having been put back in, they netted out over five hundred pounds (in weight) of roach and bream and other “nuisance” fish.
Where did they come from?
And I wasn’t best pleased by an advert from Viz magazine. My copy of the latest issue arrived in the post yesterday. Today the nice people at Viz were offering three issues for twenty pence. I’d like that bargain… I suspect I got it when I first subscribed, but that was some years ago.
There was also a lot of comment about allegations that Nigel Farage had been offered a peerage. Is this why his Brexit party isn’t going to contest the Conservative-held seats in the upcoming election?  Personally I think this isn’t the case. I can’t help but think that if the Brexit party stood in all the constituencies in the UK they would have a chance of winning the election, and the last thing Nigel Farage wants is to be Prime Minister.
As Boris Johnson has found out (to his cost) there is a world of difference between standing on the sidelines shouting, and actually being expected to do something.

I took the dogs for a walk round the park. We met several other dogs, and we all played nicely. Mind you there was one “episode”. Some stupid woman was walking a small fluffy thing. On seeing my dogs she started screaming, picked her dog up and waved it around at shoulder height as though it was some toy, and then got really aggressive with me because my dogs thought she was playing some sort of game.
Some people shouldn’t have dogs.
I commented on this to other dog walkers; they’d met her too…

We came home; I settled the “Terrible Twins” and took fudge to the vet for his M.O.T. Part of the health insurance package is an annual health check. Despite his spondylosis (spine fused and not flexing) and ongoing kidney disease, he’s doing OK. He’s put on some weight which, as the vet said, is a good thing. I can’t help but think that no-one’s told him that he’s not well, and so he acts as though he isn’t.

I set off to work. Pausing only briefly to unload a bootful of rubbish at the tip I was soon going up the motorway. As I drove the pundits on the radio were talking about a "superhero shop" in New York where ostensibly superheroes go to get their supplies. In fact the thing is a somewhere that schoolkids go to be inspired to write.
It sounded a fun idea. I wouldn't mind doing something like that. I wonder if I might make any money out of it.

I took a circuitous route in to work via a church micro in South Maidstone (as one does), and then spent over half an hour in a traffic jam. Consequently I was too late in to work to get any lunch. I pressed on until tea break when I roughed it with a peanut butter sandwich.

I had a rather busy late shift… and my back still hurts..