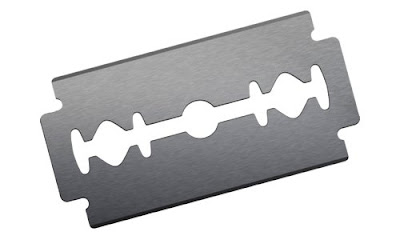 I got up after something of a restless night and had a shave with one of the new razor blades I bought yesterday. I am incredibly mean with razor blades; when you see the advert about buying them cheaply on-line I always laugh. According to those who should know about these things, a razor blade should be good for a week or so. Having bought eight of the things yesterday for twenty-four quid, that works out at a week’s shaving for three quid (not counting shaving gel). Stuff that - I usually get about two to three months from a razor blade.
Mind you I could feel the difference using a new blade.

I watched another episode of “Green Eggs and Ham”, then sparked up my lap-top.
A couple of days ago I read that a friend’s car had been stolen. Apparently last night it was found burning. I’m rather confused here. The car was reported missing a couple of days ago. It has been driven around roads where there are cameras which supposedly are capable of number plate recognition. So why weren’t the authorities able to locate the car whilst it was being driven about rather than waiting until the fire brigade had to go and put out the fire started by those who had stolen it?
I had an email from LinkedIn with connection requests from people I’ve never met. I had an email from Amazon suggesting I bought that I’ve already bought. But perhaps the most baffling email was one from the Lego corporation suggesting I might customise a Christmas present for a friend by randomly searching their catalogue until I found something they might like. How is that “customising a Christmas present”?

I set off to work on a rather cold and dismal morning. As I went up the motorway the pundits on the radio were interviewing that odious Nigel Farage. Having announced that his Brexit Party isn't going to field any candidates for the upcoming elections in three hundred constituencies where the Conservatives look set to win, he's removed any chance of the Brexit party ever actually getting any power. He wasn't at all happy when his party was described as a "pressure group" rather than a "political party", but he couldn't deny it.
There was also a lot of talk about the gender pay gap. In a lot of workplaces, men are still being paid significantly more than women. Even though that has been illegal for over forty years. So much for the rule of law (again!)

I got to work; I did my bit. At tea break "er indoors TM" sent a message. She'd taken Treacle to the vet to sort out his coughing. I thought the coughing was a *lot* less today than it had been yesterday, but dogs are a worry. The vet couldn't find anything wrong, so we're hoping for the best. I couldn't help but think she had a bit of fluff stuck in her throat. A bit of fluff from something she shouldn't have eaten. But this evening when walking the dogs round the road, Pogo seems to have developed a cough.

​Bearing in mind the dog had been at home with "er indoors TM" today, we popped round to see "My Boy TM" and Cheryl. We had a rather good kebab takeaway for dinner…

I’ve now got stomach ache to go with my back ache.