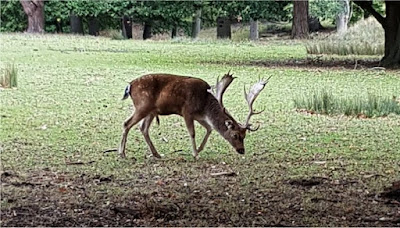 I woke up feeling not too grim. Not wishing to spoil anything I decided against sloshing salty water up my nose today. That is guaranteed to make me feel ill.
Over brekkie I saw I had a friend request on Facebook from “Bonnie Decosta Hilda”. Judging by the photos on her profile (in which she was engaged in some rather un-moral activities) I decided to keep her at arm’s length. It never fails to amaze me that the authorities at Facebook clearly make no attempt whatsoever to keep the porn-merchants out.
I then read something that made me think. A friend had copied someone else’s status in which they were posting about a motor-home having been stolen. Motor homes are *huge*. There is supposedly number-plate recognition technology all over the place on our roads. Is there *that* much of a market in breaking down motor-homes for spare parts? I wouldn’t have thought that stealing a motor-home was a practical proposition?

Despite not feeling quite the full one hundred per cent we got the dogs organised and drove out for an adventure. As we drove we listened to the local radio; we’ve become quite fascinated with the presenter who runs the show on a Saturday morning. Her continual hesitancy is slowly getting better, but her chronic gasping for air is getting worse. This morning was particularly amusing; following a big build-up to an interview with a local author something went wrong. The author being interviewed could be heard; the asthmatic interviewer could not. She wasn’t quiet; she was utterly silent. From the author’s comments I could guess at what was being asked, but it didn’t make for the sort of radio station that it might have done.
I can also guess at how long this state of affairs will be allowed to carry on during prime-time local radio…

We got to Linton where we met Karl, Tracey and Charlotte. As well as me with my nose and Fudge with his kidneys, Karl was suffering with a rather nasty bug too, but it was ages since we’d last had a good walk, so we soldiered on. And the paths around Linton are rather pretty. We’ve walked there before, and I expect we will walk there again. As we walked we put the world to rights, and saw the deer, and some alpacas, and got to spend a few minutes in a goat sanctuary.
Our lunch stop was particularly special. Earlier in the year I was given the opportunity to have a virtual geocache. I used mine in the local park on the Hubert fountain. A fellow hunter of Tupperware used hers at the church at Boughton Monchelsea (which is where we were today). There is a bench overlooking a huge deer enclosure and it has one of the best views to be had for miles around. We sat there for quite some time; it is a rather special place to be.

With walk walked we came back to The Bull at Linton. The views from the beer garden over the Weald are to be seen to be believed.
I like our weekend walks; I like a pint with friends too. And I took a few photos whilst we were out as well.

I must admit I had been in two minds about going out today. Not having been out for a decent walk for ages meant I was going stir-crazy. But only being a few days post-surgery meant that I was probably not well enough to go for a decent walk. We walked five miles; our walking time was actually under two and a half hours. I was *very* glad to have gone out, but in retrospect I might just have overdone it a tad.
I think it’s fair to say the dogs had overdone it; as we ate a rather good fish and chips dinner "er indoors TM" pointed out that the dogs were both too tired to scrounge.