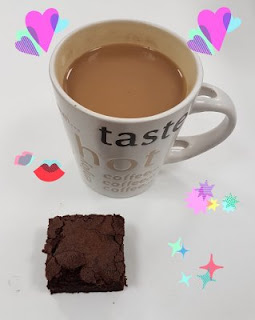 I didn't feel that good when I got up this morning. I considered phoning in sick. Instead I made up some salt solution, syringed out my sinuses, and managed to blast out some rather huge lumps of scabby yukky gunge.
That perked me up somewhat, as well it might. I suppose it is only three weeks since my operation... I'm supposed to do this up till Christmas.

As I scoffed granola and watched an episode of "Inside No 9" so Fudge woke, got up from his basket and stood by the living room door. Rather than sitting with me, he wanted to go sleep on the bed upstairs. As I got up to see to him, so "er indoors TM" came downstairs and took him upstairs.
I then had my usual rummage round the Internet; I had been hoping that overnight someone might have claimed the train pass card that we found yesterday evening. No one had. So much for the power of the Internet...
I did have a flurry of emails. Four different groups of people had been out doing my newest Wherigos yesterday. Unlike the people who visited last weekend, yesterday's visitors were somewhat more complementary in what they had written. I do like reading a "Found it" long on a cache of mine that leaves me thinking "that's nice" rather than one which has me feeling "sorry I bothered".
Sometimes I can be a rather sensitive little petal...

I set off to Pembury on a rather murky morning. As I drove to work the pundits on the radio were talking about how our old friend science has shown that people with arthritis suffer more pain on wet days than on dry days.
Is this news?
My gran complained that bad weather gave her gyp fifty years ago.
There was also talk of a possible upcoming general election. They wheeled on the chairman of the Conservative party onto the radio. He wouldn't deny that his bunch's election propaganda actually contains lies about the Labour party. You would have thought that Mr Corbyn had already dug a big enough hole in which to comprehensively and permanently bury the Labour party without anyone needing to make up lies about them, wouldn't you?

I made better time to Pembury today that I did to Maidstone yesterday. Mainly because I didn't have to contend with the mayhem on the motorway. And now that the mayhem is at its peak it would seem that the entire concept of a "smart motorway" is to be shelved.
About time too... Such a shame that so much money had to be wasted on it though...

I got to work; I did my bit. Over dinner and tea breaks I finished my latest e-book. The "A World Torn Down" series of e-books was something of a disappointment. The story is set in Humberside after a plague has wiped out most of the human race. But despite being entitled "A World Torn Down", most (if not all) of the action takes place within a very small area around the Humber bridge (from the author's website, this would seem to be where she lives) and this is a shame. The story would have benefited from the scope that travelling a post apocalyptic UK might have offered.
The story followed the adventures of various characters (some believable, some not so). For some odd reason the most interesting characters were dropped half-way through, and the promised sequel threatens to pick up some of the duller ones.
I had a serious issue with one of the major protagonists who might be best described as a "psycho-bitch-from-hell". Marching round shooting all and sundry with a crossbow and selling children into slavery, why were none of the other characters prepared to actually kill her (which I would certainly have done)? And if no one is going to do for "psycho-bitch-from-hell", it is rather implausible that it would never occur to anyone to relocate well away from "psycho-bitch-from-hell". If there is some bitch-queen marching round with a crossbow shooting people for sport, would *you* live within walking distance of her for three years (bearing in mind  that most of humanity has been wiped out and you can go wherever you like?)

I didn't really like this story. What really hacked me off was that the story was broken up into six books. Was this to extort more money from the readers? Together they made one  book of seven hundred pages, but having to make six purchases it cost eleven quid.
I've just taken pot luck and bought an e-book that came up on my Facebook feed. Five hundred pages for one pound ninety-nine pence.

As I finished that rather turgid book I scoffed a chocolate brownie. A colleague had made cake. I like cake. The rest of the day was rather dull after cake…