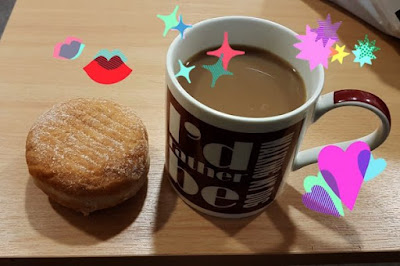 I slept like a log. Over brekkie I watched an episode of “Inside No 9” which was rather good. I then sparked up my lap-top for my usual root around the Internet. Nothing at all (for once) had happened on Facebook, so I checked my emails. I had quite a few emails about people having found geocaches that I’d hidden.
And that’s when my piss boiled…
A group of people had come to Ashford over the last weekend specifically to do my new Wherigos. I won’t go into excruciating details, but I just wish that when people find a film pot under a rock and write their “found it” log to tell the world about it, they might re-read what they’ve written. And then ask themselves if what they have written actually conveys their meaning? Specifically will it leave people feeling more or less likely to be bothered to put out more caches? (bearing in mind that they clearly like going to find caches and that they are pissing off one of a very small group of people who has taken the trouble to put out a cache …)

As I drove to work the pundits on the radio were again talking rubbish about Brexit. The latest seems to be that having had his plans for a fast-track Brexit thwarted, the Prime Minister now wants a general election. However no one else seems keen on the idea, presumably because whoever wins will have to sort out Brexit which is demonstrably un-sortable.
There was lots of talk about Brexit on this morning’s radio - the only bit of the morning's radio which wasn't was the "Thought for the Day" bit which was all about some vicar or other taking on a refugee child. The refugee child just wanted to play. and the vicar was banging on about how he was thanking God for the child's playful and happy nature. He somehow drew a veil over the reason why this child was a refugee, and his God had nothing to do with the death of the child's family

I got rather fed up listening to the drivel on the radio this morning. Being at Maidstone today meant I'd gone up the motorway. I should have left home earlier; the roads were incredibly busy. The journey which sometimes takes thirty-five minutes took over an hour and a half this morning.
But I got to work, and there were doughnuts for tea time.
As I worked I had something of a shock; the elastic in my undercrackers went. there's nothing quite like a busy day at work with your pants slopping all over the place.

I came home to find "er indoors TM" getting the leads and illuminous collars on to the dogs. We took them round the park (in the dark) for a walk. As we walked we found someone’s train pass laying in a puddle. I picked it up and posted on four local Facebook groups to tell the world that I had it if the owner would like to get in touch to arrange collection.
I wonder if they will…