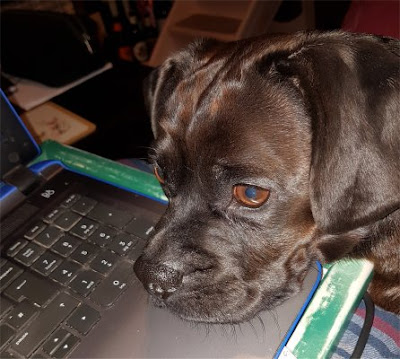 I didn't sleep well; I saw every hour of the night and it was such a shame that the alarm went off when I was actually fast asleep. I came downstairs and said hello to Fudge. Seeing I was up he took the opportunity to ask to go out in to the garden to play silly beggars. He didn't actually "do" anything that you might think he would; he just ran round the garden for a bit before going back to his basket and going to sleep.
I watched an episode of "Inside No. 9" then set off.

I walked down a very dark road. And Bond Road was even darker. It amazes me that there isn't any public outcry on any of the local Facebook groups about the utterly inadequate street lighting we have.
As I drove to work there was some nature program being broadcast on the radio. Stone Curlews sounded to be rather amazing; odd what you can find interesting at six o'clock on a Sunday morning.
With curlews done. they then talked about the news. Over a million people marched in London yesterday protesting against Brexit. Parliament apparently has thwarted the Prime Minister's scheme and he has had to write to the European Union asking for yet another extension to the Brexit deadline.  The word is that he's sent two letters. One which is asking for a Brexit extension (because he is legally obliged to do so) which he hasn't signed, and another letter saying he thinks an extension is a bad thing which he *has* signed.
This whole Brexit thing is getting on everyone's wick now.
If we as a nation aren't going to revisit the entire concept of Brexit properly (and with no lies from either side), I can't help but feel that it's now time to either just do Brexit right now or give up with it.
Mind you, bearing in mind that what is being offered is in no way remotely similar to that for which everyone voted, is a second referendum such a silly idea?

I got to work; I thought about having a cooked breakfast. I decided against it. The last one I had at work wasn't that good. I got on with a rather busy morning, saw something rather interesting down the microscope, and came home again.

Once home I walked the hounds round the park. We had a relatively good walk; we chased a squirrel up a tree.
We came home to find Pogo back in residence. "er indoors TM" had been over to Margate. "Daddy’s Little Angel TM" needs a little break, and so we’ve got Pogo for a while. I can’t say I’m pleased about the arrangement, but there it is. It’s not as though I had any say in the matter… To be fair to him, he’s a loveable dog… he’s just rather high-spirited. I shall persevere with his training…

"er indoors TM" went bowling. With three dogs snoring I had a pomegranate. Three dogs soon woke up when there was food about; they didn’t get any.
As I scoffed pomegranate I watched “Living with Yourself”; a new thing on Netflix. It’s got here who used to be in “Trollied”, but apart from her in the nip in the shower, so far not a lot has happened.

I wonder how well Pogo will sleep tonight…