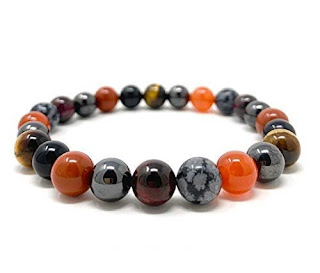 Again I didn't feel that good when I got up this morning. But five o'clock is early; who does feel in top form then? I again considered phoning in sick, but instead made up some salt solution, syringed out my sinuses, and managed to blast out more rather enormous lumps of scabby yukky gunge.
Better out than in, eh?
Over brekkie I watched another episode of "Inside No 9" then had a look at Facebook. There are several people that I keep as "Facebook Friends" purely to watch their antics. One of these (who is currently trying to sell her house for half a million pounds and regularly pleads poverty) was transmitting to the world from yet another foreign holiday. This woman makes me laugh. Having posted all over Facebook how others are paying her daughter's five-thousand-pounds-per-term school fees because she is so poor, she never seems short of money for a holiday.
I also had an email to say that a bracelet I'd bought for "Daddy’s Little Angel TM" had been posted and should arrive today. It’s some new-age hippy thing; hopefully she’ll like it.

Before I set off to work I spent a couple of seconds dragging the recycling bin onto the pavement. Everyone else up our road had moved their bins to the edge of their front gardens last night, and the jobsworths from the bin company had then moved them all to strategically block the pavement. However we'd not moved our bin forward the requisite six feet to the front of our garden, and so the people who move the bins had left it. I moved our bin onto the pavement since the bin men are demonstrably incapable of walking the six feet from pavement to bin.
I've complained to the council about this before, but the bloke at the council says we have to "appease the contractors".
If you want a laugh it is fun to complain about the bin men on the local Facebook pages. One of the bin men has appointed himself the social media spokesman for the local bin men, and he gets rather vocal if anyone says anything about the bin collection which isn’t absolutely glowing with praise. I'm sure his manager has no idea of this, or he would surely have been sacked for some of the things he posts.

As I drove to work (quite a bit earlier than usual) the pundits on the radio were playing extracts from "Yesterday in Parliament".
What a load of hot air.
I've been saying for years that I don't believe in democracy, and our parliamentary democracy is a shambles. These so-called "debates"... No matter what they are "debating", whoever is talking merely repeats the tired old arguments that their particular party has been repeating for decades. And the winner of the "debate" is whichever party gets the most people to show up for the vote at the end. No one comes up with any sensibly reasoned arguments that aren't party-politically motivated, and no one ever says to anyone else "that's a good point - I hadn't thought of that".
We as a nation *really* need a new political process.
Ironically there was then talk about the Prime Minister’s plans for a December general election. I really did laugh out loud as I drove. One of the problems of having a general election in December (according to the experts in holding elections) is that the nation has over the last few years replaced pretty much all the street lighting with these L.E.D. lights which are widely accepted (by pretty much everyone except those who are responsible for street lighting so it would seem…) not to actually illuminate anything. And apparently a December election would mean the expense of illuminating the polling stations and the streets round them.
I might have mentioned these L.E.D. lights before?

I got to work for the early shift, and did my bit. I spent much of the morning looking out of the window at a rather bright morning. I was rather jealous that a group of friends had gone off for a walk today. I thought it would have been good to have gone along until I saw the wind and rain that came an hour or so later.

With work done I came home. I found that "Daddy’s Little Angel TM"’s bracelet had indeed arrived. I can’t work out why a bracelet only three inches in diameter had to come in an envelope far too big for the letter box though. I also had a parcel containing four Lego wheels (each only two inches in diameter) which was even bigger than the envelope the bracelet came in.

I took the dogs for a little walk up to the co-op field. We had a good stomp about up there. Fudge enjoyed playing ”chase”, but he is obviously getting more and more awkward as he moves

"er indoors TM" should be home soon… I wonder what’s for tea….