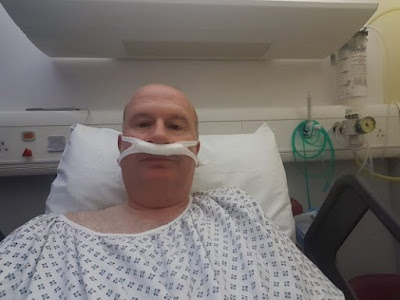 Finding myself wide awake at two o’clock I got up and spent a couple of hours working on my latest Wherigo project. By half past three the second game (of sixteen) was written, tested and ready. In this one you get to “follow the Yellow Brick Road” together with some really irritating music.
Flushed with success I then built the first brainteaser game in less than an hour.
I was rather impressed with how quickly this all went together compared with the hard work and disasters I’d had with the first game.
I went back to bed just before four o’clock, finally falling asleep five minutes before the alarm went off at half past five.

We got up, got ready and "er indoors TM" dropped me at the day surgery unit at the Kent and Canterbury hospital. Today’s operation had been scheduled for January 2017, but as I was starting the new job I’d asked if we could put it off a little. What with one cock-up after another by the admin I finally got the nasal re-bore today.
I sat and waited with the Great Unwashed, and tried not to laugh out loud at some of them. One bloke loudly announced that he was going to get his wife a bar of chocolate as she’d not eaten since yesterday. He got rather aggressive when the nursing staff told him that she wasn’t to eat anything. He said that chocolate didn’t count as food, and then listed every single brand of chocolate bar know to science just in case one might be permitted. Finally he conceded defeat, and said he’d just get her jelly babies and walked off (presumably in the direction of a shop).
I got called through to a ward where I went through all the paperwork with the nurse, and chatted with the anaesthetist and the surgeon. I then got into the surgical gown, got my book out and waited. There was a lot of waiting today. Mind you I think I waited better than some did. After five minutes the chap in the next bay changed out of his surgical garb back into his clothes and went up to the nurses’ station. He loudly told them that because he was psychotic he was going out, and that they could ring him on his mobile when they were ready for him.
Another argument kicked off.
And then there was a third set-to when some chap was furious to be told that he couldn’t drive himself home after a general anaesthetic. Despite having been told this months ago, he’d driven to the hospital anyway, and was frantically phoning everyone he knew as the staff were refusing to operate unless he could give them details of who would be driving him home.
And these people are allowed to vote, you know…

My time came. In the past when I’ve been knocked out it has been in a side-room. Today I was taken into the operating theatre to be gassed. I must admit it was rather daunting, but an hour later I was sitting up in the recovery suite chatting with the staff. I was amazed that my nose was clear and that I could breathe, and I was also amazed at how well I seemed to be compared to everyone else who hadn’t come out of the anaesthetic quite as well as I had.
I was taken back to the ward where I sat and waited. I read my book for a bit until the surgeon came for a chat. All had gone well. He’d removed three polyps; each the size of a golf ball.
Drips were removed, I got dressed. It wasn’t long before Cheryl was outside to drive me home.