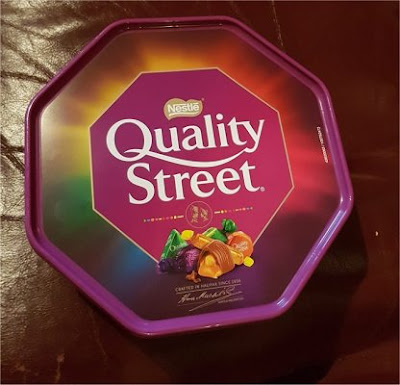 I woke at four o’clock feeling a little more with-it than I was when I went to bed last night. I still felt rather “bleaugh”, and wondered if washing the gunge out of my sinuses might chirp me up. Part of the post-operative recovery is saline sinal douches over the next few (sixteen) weeks. I made up some salt solution, stood over the bathroom sink, and (using the syringe they’d given me) I squirted a load of salt water into my conk.
It went up, I squirted more. There was a most odd taste of salt around my right eye, and within a few seconds the sink looked like a scene from that classic move “The Texas Chain Saw Massacre”.
Whilst all that gunge needed to come out, I can’t say that the process has chirped me up in any way, and I went back to bed feeling considerably more “bleaugh” than when I’d got up.
I then spent five minutes wrestling with Treacle trying to get some of the duvet. I’ve often heard people say that their dogs know when they are ill. My dogs may well know that I’m not feeling at all right, but Treacle is certainly making no concessions over the matter.
I dozed fitfully before finally getting up just after seven o’clock. Over brekkie I took my newly-prescribed tablets. Another week of steroids (I’d rather not) and antibiotics. The antibiotics had a stern warning that the dose must be taken evenly throughout the day; the dose being one tablet a day (!)

Yesterday when in hospital I’d had a thought about my new Wherigo project – are the picture puzzles going to be visible on a phone screen? Are they going to be too big? I programmed in a quick dummy zone (only took an hour), put my new bootlaces into my boots, and walked the dogs out round the co-op field to test it.
The testing went well; the walk could have gone better. Feeling under the weather I didn’t want to be mixing with all the normal people this morning so I thought we’d avoid them if we stuck to the co-op field. It was a shame that OrangeHead had to come through as Fudge always wants to walk off with her and has to be dragged back in his lead. And then five minutes later her Chunky Little Friend came through too.

Following the success of wheri-testing, with the walk done I spent a couple more hours programming Wherigo until it was time to take Fudge to the vet; he had an appointment to have his blood pressure measured. We arrived and went straight in, and Fudge had the cuff wrapped round his tail. Eight measurements were taken over ten minutes; apparently in dogs only the systolic measurement is noted. I had mine measured many times yesterday and it averaged about one hundred and twenty mmHg. Fudge’s averaged at about a hundred and fifty. The given reference range was between one hundred and twenty and one hundred and thirty, but no concern is really expressed on measurements below one hundred and sixty as being at the vets stresses dogs out anyway.

We came home; Treacle was very indignant about having been left home-alone, and told me so in no uncertain terms. Over a spot of lunch I watched the last episode of “Nightflyers”; a series which started badly and got progressively worse as it went on.
I then took shirts out of the washing machine and ironed them as I started watching “Pride and Prejudice” on Netflix… but that can be our little secret. The instructions I had when leaving hospital yesterday specifically said that I was not to use a washing machine for twenty-four hours after being discharged. To be honest I was intrigued as to why I shouldn’t use a washing machine, and was determined to find out why. Nothing went wrong (which was probably for the best). Flushed with success at washing shirts I stuck a load of undercrackers in to scrub.
With shirts ironed I made myself feel ill by washing out my sinuses again, then settled down to program more Wherigo. Having found out what a “rebus” is from Monday’s crossword puzzle, I decided to incorporate rebuses (rebi?) into the project. Having done so, I’ve now included a shooting gallery, another mind-teaser, and think I know the way forward for putting in a cockney rhyming slang dictionary.

"er indoors TM" came home a tad earlier than expected, and we phoned "Stormageddon - Bringer of Destruction TM" who was five today. We’d decided against going to see him – he doesn’t need too much distraction on a school day.

We had a rather good bit of dinner then watched a couple of episodes of the new series of “Plebs”. I think an early night as definitely in order. As well as all the excitement of yesterday I’m feeling a tad iffy. "er indoors TM" bought me a tub of Quality Street as a get-well pressie and I scoffed the lot…