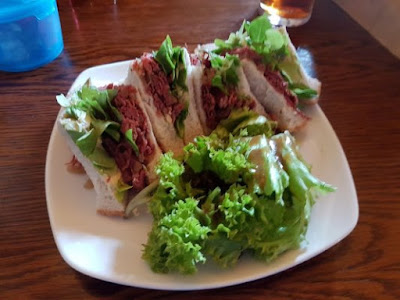 I got up after a better night. Mind you I got up to find the toilet was making an odd noise. It does that from time to time, and in its place I would probably do the same.
The cistern hadn’t filled because the water was going straight down the pan. I fiddled with the thing and got it working, but I wonder how long it will last?

Over brekkie I had a look at the Internet. Some chap was posting on one of the local fishing-related Facebook pages bemoaning the Carp Society. Apparently there is a “Carp Society” and once a year it has a big get-together. One of the highlights is when those who’ve caught the biggest fish tell everyone else about what they caught. But it would seem that this year’s show isn’t going to be very well supported; mainly because no one likes listening to pompous windbags banging on about how good they are at fishing when the truth of the matter is that they weren’t any better; they were just luckier.

As I scoffed, someone who lives on Park Farm was posting on the local geocaching pages asking what Wherigo was all about. I hope I explained it properly; for a high-tech hobby, Wherigo takes some explaining.
In the meantime the dogs played tug o’ war with an old sock. Mind you Treacle cheated; with both dogs pulling the sock with their teeth, she put her paw on Fudge’s nose and pushed.
It was good to see them playing; it was only when "er indoors TM" posted a video (on Facebook) last night of them playing that I realised that Fudge hasn’t played with Treacle for months. Was it because the insidious onset of the kidney problem was making him feel ill? I’m taking this playing as a sign that the new diet and medicines are working.

"er indoors TM" popped up to town. Her intention was to shove the broken food mixer up the bum of the shopkeeper from whom she’s bought it. I wrote up a little more CPD whilst the dogs played tug o’ war with a pair of "er indoors TM"’s less racy undercrackers.
I managed ten minutes CPD before losing interest, then had a little root on-line. A couple of weeks ago I built a Lego Cadillac, Someone had posted a piccie on-line of the same car; only blue. I had a plan I might make one out of my spares, but I wasn’t sure how many bits I’d need before I went rummaging in my spares box.  Mind you, five minutes on Google came up with this website. Now I know what to rummage for, and what to order from eBay. I ordered quite a bit…

We drove out to Park Farm. There had been talk of going out for a walk near Sevenoaks, or on the Romney Marsh. But with the weather being as iffy as it has been we thought staying relatively close to shelter wouldn’t be a bad idea. We arrived early, and as we waited for everyone to arrive we listened to local radio, This has become something of a standing joke for us; the Saturday morning local radio is -um-  -yeah-  (gasps for air) something that  -um- has to be heard – yeah- to be (gasps for air) to be – um- believed.
We met Karl, Tracey and Charlotte at Sheepfold Lane and played the James Bond Wherigo that I created last week. We had a rather good walk, and as we walked Tracey worked out how to get street maps onto the Wherigo app. I’ve been creating Wherigos for six years and for all of that time I thought that this would be an amazing thing to have. I learned something today.
With Wherigo Wherigo-ed we adjourned to the Singleton Barn for a spot of lunch. A few beers and some beef sandwiches went down very well. As we put the world to rights so the heavens opened; we were right to have stayed local today.

"er indoors TM" dropped me and the dogs at home; she’d had a message that new food mixers had arrived in Argos. We came in and put the kettle on; "er indoors TM" arrived soon after with another food mixer that didn’t work.

The plan had been to go to Hastings bonfire parade tonight, but with the dodgy weather forecast and having an early start tomorrow, we thought better of it.
I would have liked to have gone to the bonfire parade, but it makes for a late night…