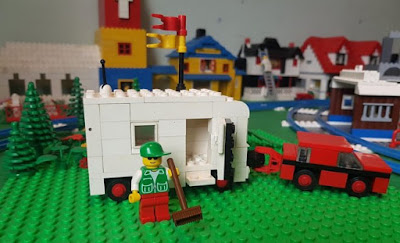 Treacle was restless last night, but I can’t really complain. There is a world of difference between being woken a couple of times and laying awake for hours.
Over brekkie I peered into the Internet as I do most mornings. There were one or two things worth seeing, a couple of jokes that were vaguely amusing, and no end of bitterness about American and Scottish politics. I can’t see why people who live in Kent seem to concentrate so much on the politics of other countries whilst ignoring the disasters running riot in their own country.
I had an email from Amazon saying that based on what I’d been looking at recently, I might want to buy a toy train set. Amazon’s suggestions of what I might like are rather dubious. The other day I typed “1970s Lego” into the Amazon search; maybe one in four of what came up was actually 1970s Lego.

I got the dogs’ collars and leads on. That took some doing. For all that they get very excited about going out, they flatly refuse to be still to get their collars on. What could be done in ten seconds takes five minutes as both charge around barking.
We drove out to Park Farm. Yesterday I amazed myself in getting all the Wherigo programming done for my new Wherigo series. This morning all that remained was final testing of the thing and putting out the caches. The testing worked well. The caches got hidden as well as any film pot can be stuffed under a rock. It was just a shame that the weather was against us. Rain had been forecast, but I’d hoped we might be lucky.
We weren’t.
We were about a quarter of the way round when the heavens opened. Because we’d started I decided to push on and finish, but we were soaked through by the time we got back to the car.

I had a sandwich, and as I did the ironing I watched a film on Netflix. “The Space Between Us” was utter tripe. I’ve seen some bad films in the past, but this was absolutely awful. An astronaut leaves Earth bound for Mars only to find she is two months pregnant. Really? Phone calls from Earth to Mars with no time delay at all. Really? It was *so* bad that I watched the lot just to see what would come next. If ever you get the chance to watch it, don’t bother.
I then spent ten minutes rummaging in my Lego spares boxes. At the weekend I’d seen a 1970s Lego car and caravan sell for eighteen pounds. I thought that was a tad steep; after a few minutes digging about in the spares box I made a virtually identical car and caravan.
Flushed with success I then watched the Christmas episode of “Trailer Park Boys”. That was rather good.

"er indoors TM" came home, boiled up some dinner and went bowling. I watched the first part of a documentary about Sir Ernest Shackleton; the bloke was rather amazing, wasn’t he?

I should really have an early night; I’m back to work tomorrow…