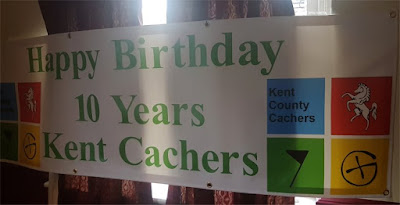 Fudge sat with me as I scoffed my toast this morning. I must admit I started the day in a bit of a sulk. On Wednesday I set up the Adventure Lab caches I was lucky enough to be awarded. This morning over brekkie my finger hovered over the “delete the lot” button. They’ve each been logged ten times. Three by local cachers who’ve actually done the tour, and seven by people who live thousands of miles away and haven’t logged a physical cache within a thousand miles of these lab caches. It didn’t take more than thirty seconds to see that these seven people have logged hundreds of these adventure lab caches. Clearly these people have figured out how to set up a VPN and are cheating. I’ve brought this up with the authorities at geocaching dot com who have made it clear they condone this cheating, and that they intend to do nothing about it.
I mentioned about this on one of the geocaching Facebook groups last night. A friend had commented. I shall let these Adventure Lab thingys stay for now, but if this cheating continues I shall delete the lot… what’s the point of setting up a tour of the town if people are just going to blag it from home?

I spent a little while working on a new Wherigo project. Rather than totally re-writing one from scratch (which would take an absolute age) I’m re-working an existing one. It will still take a long time to do, but it keeps me occupied. Just moving the locations from what I had originally to my new locations took over an hour to do.
As I fiddled about so "er indoors TM" tried to get the dogs to eat. Fudge scoffed his brekkie but Treacle was being fussy. As Fudge has become more and more of a gannet (because of his kidney issues) so Treacle has become more and more of a picky eater.

I drove the dogs down to Park Farm; I’d forgotten to get the GPS co ordinates of one of the locations I’d chosen. It didn’t take long to get the number we needed. Whilst we were there we had a little wander about. Back in the day, Park Farm was the posh part of town; today the pavements were strewn with dog turds, and many of the houses had harridans shrieking out of the windows.

We came home, settled the dogs and drove out to Cobtree Park where we met Karl and Tracey. Usually we’d have a decent walk at the weekend, but today it was raining. Being Earthcache Day we thought we’d do the geology homework exercise that was the Earthcache there, then go on to the monthly meet-up of hunters of Tupperware.
We met up at some odd statue and answered various questions about it. I *think* I got them right, but I’m no geologist. We then went on to the geo-meet-up. The Brewers Fayre at Leybourne is always a popular venue for these meets. At the risk of sounding negative, I wish it wasn’t. The bar staff are *incredibly* slow, and they insist that the ale be served ice-cold. The more you try to tell them that it isn’t supposed to be ice-cold, the more they insist it should be. But useless staff notwithstanding we had a good meet-up. It’s always good to catch up with friends.

Three pints and two double ports later we said our goodbyes. I slept much of the way back to Ashford where we stopped off at Sainsbury’s. "er indoors TM" has been reading up on what treats are good for dogs in renal failure. We got some special flour with which we (she) can bake something or other, and we got him some bananas and carrots too. We’ve got this plan to bake the bananas, and the dogs seem to be quite keen on the raw carrots.

"er indoors TM" has gone off to film night. I shall sleep in front of the telly.