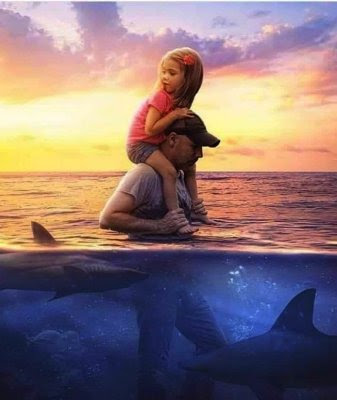 After two weeks sleeping well, I set an alarm, and was rather restless for most of the night. It must be having the alarm set that stops me sleeping.
Over brekkie I watched another episode of “Inside No 9” then had a quick look at the Internet (as I do every morning) to see if I’d missed much overnight. "Daddy’s Little Angel TM" had posted something rather special on Facebook. For all that she is a rather noisy and somewhat opinionated thirty-something, she’ll always be my little angel. When I finished blubbing about what she’d posted I made a comment and she immediately phoned me (at six o’clock this morning). She was rather over-excited about new-age hippy numerology nonsense. I didn’t have the heart to argue with her.
I also saw one or two adverts for “No Bra Day Chat Group” on some of the work-related Facebook groups I follow. As you could probably imagine, “No Bra Day Chat Group” wasn’t really the sort of thing you’d want to see on social media. I reported it to the Facebook Feds for “nudity” and “sexual content”, but I would bet good money that the authorities at Facebook won’t have any problems with it. In the past they’ve told me that child pornography and animal abuse don’t breach their “community standards” so I imagine that a “No Bra Day Chat Group” would be very tame in their world.

As I drove to work so the pundits on the radio were talking about how today was going to be a dry day, but there might be one or two isolated showers. I think one of those isolated showers followed me from Ashford all the way to Pembury.
I've missed my drive to work as it is my big chance to listen to the radio and catch up with the news. Today the news was about how the NHS is struggling like it has (supposedly) never struggled before. Ironically this was followed by an interview with this week's Foreign Secretary (!) who was banging on about how much the Americans spend on defence, and how the UK should spend a similar proportion of its wealth on killing people. I would have thought that maybe the UK might take a step back from killing people and spend a little more money on making people better (but what do I know?) It strikes me that what with the nation’s education and welfare and health all clearly underfunded, do we as a nation *really* need to go round the world getting involved in other people's wars.

I then laughed out loud at the patent nonsense that was presented in the "Thought for the Day" section. Some vicar was talking absolute rubbish. He'd married a Jewish girl and they were raising their children to be joint Christian and Jewish. He claimed the children were happy with this arrangement, and the fact that the two religions spout mutually contradictory gibberish would seem to be no barrier to believing any of it.​ Perhaps the vicar didn’t actually realise this? Many proponents of religions don’t really know very much about that which they profess to believe.

As I drove my phone beeped. The Wherigo project that I'd finished yesterday had received the "thumbs-up" from the geo-feds and had gone live. I was pleased about that.

I stopped off at Tesco for some shopping. Again I didn't get asked for my Clubcard. I never do; I don't think the assistants ask men about those things. I thought about getting some cakes to take into work; it was as well that I hadn't as someone else had already done so.
I got to work and did my bit. I tend not to mention work that much, but I will say that whilst I hadn't been actively looking forward to going back to work, I certainly wasn't dreading it like I was after I had my nose done last time. I'm so much happier working where I am now as opposed to where I used to be a few years ago.

As I left work my phone beeped. A friend was struggling with my latest Wherigo. Had he found a glitch in t that I’d missed? It was with a sense of relief that I got home just as he messaged me that it had all worked fine in the end.

I took the dogs round the road. Bake-Off is on telly soon. It is only a shame that "er indoors TM" has gone swimming with Cheryl. She’s left instructions for how to cook dinner, but I feel the responsibility might be too much for me…