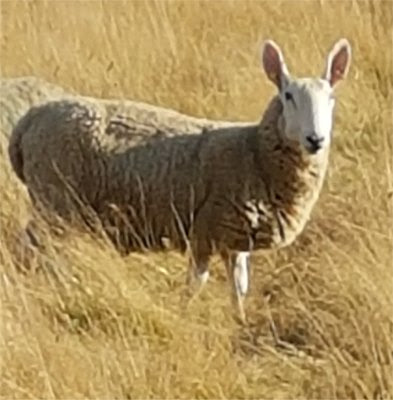 When "er indoors TM" wasn’t snoring last night, the sound of Treacle sucking the duvet kept me awake. Sometimes I wonder if my little girl dog is a bit “special”?
I got up (whilst it was still dark), and as I scoffed my toast I had a look at the Internet. A cousin had suggested I might like to follow the antics of his swimming club on Facebook. I clicked the “like” button out of politeness; it must be forty years since I was last in any swimming club. I had a little look and was amazed to find that my old swimming club is still going strong.
Not a lot else had happened on the Internet this morning, but it was only six o’clock on a Sunday morning when I looked.

As I got dressed I could hear next door’s dogs whimpering. They’d been crying all night; had they been left alone? Treacle wasn’t bothered; she carried on sucking the duvet.

It was rather cold as I drove to Pembury. I had the car's heating on. As I drove the radio was featuring some drivel in which some rabbi or other was showing the difference between good music, challenging music and bad music. It all sounded bloody awful to me.
Usually on a Sunday much of the talk on the radio is of a religious nature. It wasn't this morning. Again the Brexit debacle dominated. It would seem that the politician Amber Rudd is now in the limelight. Having survived being given the bum's rush as Home Secretary she's now resigned as Secretary for something-or-other (and also jacked it in with the Conservative party) in protest about Boris Johnson's being a knob (I present the edited version here). She described the Prime Minister as being "the life and soul of a party, but not someone you'd want a lift home with afterwards", and she said she feels she can no longer be a part of the Conservative party as it currently stands. From what I've seen of the Prime Minister, this sums him up entirely. As I once said about David Cameron, love the person or loathe the person, the office of Prime Minister deserves respect. I don’t think Mr Johnson’s premiership is commanding any.
I wonder if Ms Rudd has made a principled stand on something in which she believes, or if she is just posturing for future political gain? Time will tell. It always does.

I got to work; I did my bit. I came home again. "er indoors TM" and I took the dogs for a little walk out through the Godinton estate. Back in March I’d hidden a series of geocaches out there, and one of them had been reported as missing (three times). I didn’t think it was actually missing. We walked for half a mile to find it was exactly where I’d put it in March. Oh well… the dogs liked the walk. We made our way back to the car through a field full of very odd-looking sheep. I’ve never seen so many sheep with their ears cocked up.
As we walked we met a “rather delightful” woman with her dog. She ranted that we should keep our f…ing dogs away from her dog. I (very loudly) told her to f.. off, and everyone seemed happy with the arrangement. Her dog didn’t seem at all perturbed. If her dog really shouldn’t be bothered by other dogs then the mutt should have had a yellow collar or a yellow harness or a yellow lead or just anything yellow. That way other dog owners know there is an issue. Some people shouldn’t be allowed to have dogs…

Once home Treacle refused to eat her dinner. She’s getting *very* picky just lately; quite often she’ll only eat if she is hand-fed every scrap. Fudge however seems to have become quite the gannet. He’s recovered completely from whatever it was that gave him the shakes on Friday.
We then had our dinner; "er indoors TM" had boiled up some rather good scran. As we devoured it, we watched a couple of episodes of “Timeless” via my phone’s app and the ChromeCast. The Amazon Firestick seems to be poggered. And I was hoping to start watching Amazon Prime stuff soon too…