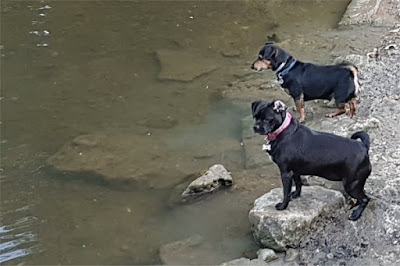 I slept like a log – I usually do after a couple of glasses of red wine. I woke to find both dogs on the bed, and for once they had arranged themselves so they weren’t taking up as much space as was physically possible.
Over brekkie I watched the last episode of “The i-Land”; I didn’t realise there were only seven episodes of it. Now I’ve seen the lot it wasn’t bad, but (like most things on telly) it wasn’t really an original story. It had ideas that were old in science-fiction before I was born.

I had a look at the Internet to see if the comment I made last night had received any replies. I’d been thinking about this Adventure Labs thingy that geocaching dot com had given me. There is one of these in Hastings based on the blue plaques that English Heritage put on houses. I walked it last week with Gordon. I was amazed at how many famous people had lived in Hastings old town. I thought I might shamelessly steal the idea and have a little tour of the blue plaques in Ashford. However I only knew of one, so last night I asked on one of the local groups if anyone knew of any others of these plaques in Ashford.
There are a few – possibly enough for me to use for this project.
As I browsed Facebook I also saw some piccies of the new house into which one of my son’s mates has just moved. It is beautiful. It is huge. He’s (apparently) paid a deposit of thirty thousand pounds, and is paying a mortgage of over a thousand pounds a month for the next thirty years. He earns double what I earn, and he drills holes in the road.
If I had my time again I would *definitely* choose a different line of work. Money might not buy happiness, but it allows you to be miserable in comfort.

As I drove to work the pundits on the radio were talking about that idiot Jeremy Corbyn.  As a life-long leftie it bothers me that I think of Mr Corbyn as "that idiot Jeremy Corbyn”. He's now announced that a future Labour government will come up with a Brexit deal of its own and offer the public a choice of his deal or of no Brexit. Bearing in mind that the best political minds of our time haven't come up with anything acceptable to anyone in the last three years, I can't see "that idiot" coming up with anything. Apparently he is going to remain neutral between his scheme and not leaving the EU. Whether this is because of impartiality, or because he hasn't a clue what he is doing remains unclear.

I stopped off at Aldi in Aylesford. I got there a couple of minutes before they opened, and (as usual) the toothless half-wit was acting as self-appointed doorman, and was rather disappointed that no one was taking any notice of him.
I went in for shower gel and came out with what looks like a lifetime's supply of bog-roll and some telescopic pruning shears. I am going to give not-so-nice-next-door's clematis a haircut it won't forget.

I went in to work. As I worked I got a message. The Wherigo project I created recently had gone live, and people had been out and had a go. All eight caches have been found, so I shall take that to mean that what I created works OK.
And then the vet phoned. Fudge's wee sample (that I took in yesterday) was full of protein. No surprises there; the level of the stuff in his blood is incredibly low.  The stuff has to be going somewhere.
The next step it an ultrasound examination of his kidneys. It is unlikely that there is a kidney infection, but there might be a stone which is making the organs play up. That is booked for next week. In the meantime the vet suggested we carry on as we have been doing for the last few weeks and months. Fudge certainly has been doing just that; none of this seems to be bothering him very much.

As I drove home so "er indoors TM" sent a message. I met up with her at the river in Great Chart where the dogs had a spuddle. Treacle jumped up at me once or twice – those trousers I washed yesterday are going back in the wash again this evening…