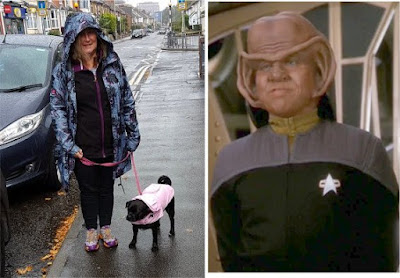 I slept for ten hours last night, finally emerging from my pit just before nine o’clock. That rarely happens these days.
I looked out at the rain, made myself some toast, and peered into the Internet as I do most mornings. Facebook was rather dull; had no one done anything yesterday? Mind you there was a row kicking off on one of the national Facebook groups. Yesterday I whinged about how few people help others out when hunting Tupperware. Today some chap was griping about how somebody *had* helped him out, and the world and his wife were jumping on the bandwagon about how people shouldn’t feel obliged to get off their arses and help out. Ironically it seems to me that (with a few exceptions) the less anyone has ever actually contributed to the hobby, the more they feel they don’t have to.
With no emails of note I carried on working on my crystal maze Wherigo project. I had a plan to have a game in it in which players have six weights (of differing weight) and three areas into which they put the weights. The idea is that to win you have the same amount of weight in each area. Creating the weights and the areas in the software took over an hour. I stopped at that point; I will figure out the programming of this bit later. (and that is just one game of sixteen)

We took the dogs for a walk. We were going to go round the park, but just as we left the house, the heavens opened so we decided to walk the pavements up to the station and come back through black alley. Treacle looked rather elegant in her girly-pink raincoat. She looked rather less elegant as she tried to eat the human excrement that was up by the old B&Q. It never fails to amaze me how the local crime-fighting Facebook pages are up in arms about “Foreign man eats chips” or “Teenagers sitting on bench” but no one bats an eyelid when the night-clubbers have a crap in the gutter on the way home.

We hadn't been back from our walk long when the doorbell rang. No one ever rings our doorbell! Brother-in-law and nephew had been in the area visiting a car show and had popped in. We chatted for a bit - they were lucky to have caught us as we are usually out and about on Sundays.
I set off for work. As I drove I listened to the radio. I caught the end of Desert Island Discs. Some musician called Thom Yorke (I've never heard of him either) was singing the praises of the song "Lilac Wine" by Nina Simone. They played a few minutes of it; I was glad they cut it short.
This was followed by the seventh episode of the eighty-fifth season of "Just a Minute", which never fails to entertain

I got to work. I had broccoli cheese for lunch on which I burned my tongue.  I then got on with the late shift. As I worked I kept glancing out the window at a very dark and dismal day. There was meet-up for all of Treacle's brothers and sisters which had been planned for this afternoon; it had been called off because of the awful weather. Without wishing to sound mean, I was glad it was called off. I like going to the dog parties; hopefully it will be rescheduled for a time I can get along. I also kept glancing out of the window at the scantily-clad young lady who was laying on the grass outside where I was working (seemingly sunbathing in the rain). From the little she was wearing it was clear that no one had told her that the hot summer days were long past.

As I had a well-deserved cuppa my phoned beeped. A friend was playing one of my older Wherigos and had accidentally scrolled past a vital bit of information. I was happy to help; I do like it when people play the Wherigos I've created.

And on a sadder note Aron Eisenberg has died. He was the actor who played “Nog” in Star Trek. He was five years younger than me…