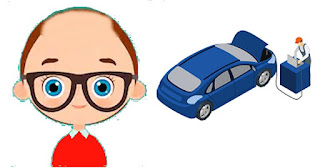 I woke feeling like death warmed up. I’ve felt better after a gallon of ale. What was that all about?
Over a bowl of granola I watched another episode of “Inside No. 9” then on seeing that nothing had happened to the Internet overnight I got the leads on to the dogs and we went out. After fifteen minutes I found where I’d parked the car last night. We drove out to the garage and left the car there for a service. Walking home meant that our way was plagued with the morning school run, but it was quite entertaining.
There would seem to be a new “thing” with cyclists. You have to cycle along with really dark sunglasses (so you can’t see anything) and have those stupid huge headphones on (so you can’t hear anything). You don’t hold the handlebars because one hand is holding a cup of coffee and the other hand is fiddling with your mobile phone. And you have to have a surprised expression because you have no idea why you have just cycled into a hedge.
We saw this a few times as we walked home.

Once home the dogs ate their brekkie and I went down the road to the dentist. Unlike last week’s debacle, today’s appointment passed off OK. I was in the chair five minutes early, and the dentist was soon rummaging about inside my gob shouting out strange numbers and weird words. “Mesial three” and “proximal seven” and the like. I would have shouted “Bingo!” had I not had a mouthful of dental ironmongery,

With dentist done I went into town. I had a plan to have a provisional recce for this Adventure Lab thingy. But (to be honest) I couldn’t find five items of historical interest that weren’t either boring or dull or both.
I went on to the optician. They did some preliminary farting about measuring eye pressures and photographing my retinas, then the optician herself did it all again. The eye test itself lasted for maybe ten minutes. My prescription has changed quite a bit (apparently). I’ve ordered some new glasses – I collect them in two weeks.

I came home, and over a sandwich watched another episode of “Inside No.9” then fell asleep. I woke an hour later when the garage phoned. The car was ready. I got up, and the dogs immediately leapt up in excitement. I’d planned to walk them over with me to get the car, but how did they know that?
Our walk to the garage was far more dull than our walk home this morning; it was a shame we got caught in a rain shower.
It only took forty minutes to get to the garage. The service had found all sorts of things that needed an eye keeping on, but as the nice man said, the car is twelve years old. He also said that the cost of the service was peanuts compared to the cost of servicing the newer cars.
Oh well… as long as the car keeps going.

I’d set the washing machine lose on my shirts before we went to the garage. We came home just as it was finishing. Both dogs went back to sleep and I spent an hour or so ironing. As I ironed I watched the last two episodes of the current season of “Peaky Blinders”. For a show which started very well, it had started to flounder, but the last two episodes were rather good. I’m told there will be a sixth season.

"er indoors TM" came home, boiled up some dinner and went off bowling. Once I’d unblocked the dishwasher I watched the first episode of “Nightflyers” on Netflix. It was OK; I understand it has already been cancelled…

For a rostered day off, today has been rather busy. And expensive. I just hope that dishwasher is salvageable. And Fudge has got an ultrasound that needs paying for later in the week…