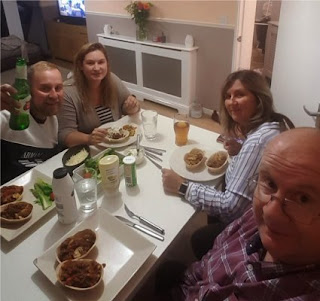 I made myself some toast, and as I scoffed it I started the week’s course of antibiotics and steroids as a run-up to next week’s surgical nasal re-bore. I also watched the second episode of “Nightflyers” which, although entertaining, is like most sci-fi in that it is clearly written by someone who’s good at the fiction but rather shaky on the science. Take the journey the spaceship is on. To quote Douglas Adams “Space is big. Really big. You just won't believe how vastly, hugely, mind-bogglingly big it is. I mean, you may think it's a long way down the road to the chemist, but that's just peanuts to space”. You can’t get out to where the aliens might be in just a few months. Or take the crew. Any crew of any spaceship is going to have to be educated. No spaceship is going to be carrying a load of gung-ho half-wit marines for no adequately explored reason. Nor are they going to be carrying a couple of sex-crazed lesbians who merely get jiggy with each other at regular intervals just to chivvy along an otherwise tired storyline.

With telly watched I sparked up my lap-top to see what I’d missed in the Internet overnight. “Esperanza Deeds” had sent me a friend request on Facebook. In fact it was more than a request for friendship. She suggested I might like to join her Whatsapp group “nudeysauceromp849”. I can only imagine that those of a more puritanical nature had seen to the closure of Whatsapp groups “nudeysauceromp1” through to “nudeysauceromp848”. I reported her to the Facebook feds, but I expect that she doesn’t breach Facebook’s community standards. However other than “Esperanza”, nothing much else had happened in cyberspace.

I drove toward Tunbridge Wells through a very wet and dismal morning. As I peered through the gloom the pundits on  the radio were interviewing the leader of some union or other. This bloke was pontificating on climate change and Brexit and loudly presenting his personal opinion as though it were scientific fact. Speaking as someone who was a union rep for years myself, doesn't this just sum up what is wrong with today's Trade Union movement?
They then interviewed some MP or other who got rather cross when challenged about the Labour party's position on Brexit. Apparently they endorse both leave and remain and seem to feel that this is both sensible and reasonable. I can't help but think that seeing how neither side of the Brexit argument has a majority with the general public, having no fixed stance on the issue will lose them the least amount of votes.
Mind you nothing will lose them as many votes as their leader "that idiot Jeremy Corbyn" who today was announced to be the most unpopular Leader of the Opposition since records began. And that has been up against some pretty stiff competition.

I got to the work's car park; I got soaked running from the car to work. Once there I did my bit despite the contents of my pockets falling out. I wish trouser manufacturers made pockets a tad more sturdy; it is always the pockets of any pair of trousers that wear out first for me. Mind you, on the plus side I got a custard doughnut.
As I worked I had a phone call from "the hospital". I glossed over the fact that I was already in one (that's where I work) and answered the nice lady's questions. She had all sorts of questions about what might have changed since I had my pre-med assessment several months ago. I don't think anything had changed at all, but we had to got through her entire list. That took some time.

With my bit done I went back to my car. My phone was down to only having five per cent charge. Why was it so flat?
Rather than going straight home we called in to see the first fruit of my loin. It is his birthday tomorrow, and Cheryl had boiled up a rather good bit of dinner. Boiling up good bits of dinner seems to be a feature in our family.

Bake Off’s on in a minute…