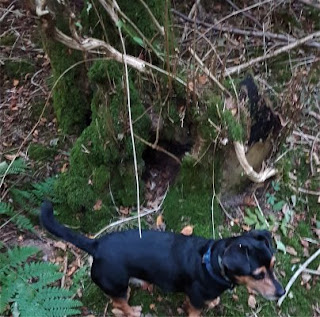 It was rather dark when I got up this morning. Having spent quite some time fighting with my latest Wherigo project last night I'd got it to a point where I was ready for one final test before trying it for real. I did that test over brekkie this morning. The run through took about ten minutes. Fortunately for my nerves it all went well.
As I fiddled about so Fudge was snoring. Last night "er indoors TM" posted a video of him running around like a thing possessed. He doesn't know he's got chronic kidney disease, and even if he does he's certainly not letting it bother him like I'm letting it bother me.
Having successfully tested my Wherigo I saw that absolutely nothing had happened on the Internet overnight, so I got dressed and set off in the general direction of Maidstone.

As I drove to work I listened to the radio. The morning farming program was on and was talking about fly fishing. As is so often the case, the fly fishermen talked about the coarse fishermen (the sort of fishing that I do) as though we were the dog turd that they had just trodden in.
Just as this finished I arrived at a post box in Maidstone. In theory there was a geocache there. There might well be; but I couldn't find it. I sulked and drove off to get petrol. Interestingly petrol is six pence per litre cheaper in Maidstone than it is in Tunbridge Wells. As I went from the petrol station to work the pundits on the radio were talking about how a couple of huge asteroids are narrowly missing crashing into Earth later today.  It amazed me that those on the radio treated the whole thing as a matter of hilarity. Anything remotely science-y is seen as the radio presenters as a subject of ridicule, but the antics of the politicians (which are forgotten by the next day) are treated as matters of grave importance.

Just as I got to work so my phone beeped. The geo-feds had given my wherigo plans the once-over and had found two problems.  Neither would seem to be insurmountable (I was pleased about that).
I got on with work and sulked. I had hoped to have been able to get to today's geo-meet. But having been off for most of the weekends in August, those who had covered me them were off on their weekends away today.

I was pleased when the relief arrived. I came home, and we took the dogs for a walk. Having done all the testing I could with my Wherigo we took it for field trials. There are one or two little hiccups to be sorted, but I can do that over the next few days.

I wonder what’s for dinner…