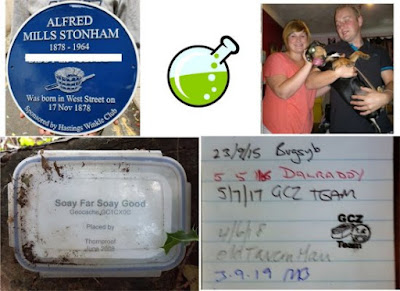 I was fast asleep when Treacle decided to start walking on my head. Having walked across it once, she walked back again. And again. I wish she wouldn’t do that.
I tried to get back to sleep; I eventually gave up and got up feeling like death warmed up. I made myself some toast and as I scoffed it I peered into the Internet. Facebook was heaving with teachers whinging about what a hard life it is having to go back to work. Doing a six-hour day after six weeks off must have come hard.
There were also posts about how the local council are planning to inspect the bins we put out and leave stickers on bins with the wrong sort of rubbish in them. It’s getting so you need a degree in dustbin studies before you dare throw anything away. Ashford council posted up to one comment on Facebook saying “We're not actually including blocks of flats and communal bins in this campaign”. Whoops! If my bins get the thumbs-down I know where I’m chucking my rubbish.

I had a load of emails telling me that people had been out visiting my new series of geocaches. All caches found; no issues reported. I’m relieved about that; the plan for today had been to go out and check all was well, but it would seem that all *is* well.
What do you do when you get two reports (on the same day) about the same film pot, one of which says “GPS co-ordinates twenty metres out” and the other says “GPS co-ordinates spot on”?

What with the vagaries of my work pattern I was not expected to turn up at work today. Seeing a new type of geo-adventure had appeared in Hastings Old Town I’d asked if anyone fancied a day out. As is so often the case, most people were busy, but Gordon was free. I took the dogs; we all met up on Hastings sea front and had quite a good time.
Geocaching Adventure Lab is a new thing. The idea is that you go somewhere, answer questions about what you find, and each answer you get right is the equivalent of finding a film pot under a rock. It has the advantage that whilst a film pot can (and often does) go missing, providing an answer should be a relatively easier way to claim a find.
The Adventure lab in Hastings was based on the blue plaques that you find on the front of houses marking where famous people once lived. Having lived in Hastings for twenty years and worked in the area where we were walking I found this little tour amazing. I had no idea that the artist Dante Gabriel Rossetti had lived in Hastings. I didn’t know that Hastings had once had its own bank based only a few yards from where I often go on drinking sessions. As always geocaching took me to the quirky little places. And we got nine joint First to Finds too. Result !!
However from a technical perspective the thing has one or two issues. It has to be done in an “on-line” mode. When I go hunting Tupperware I either have a GPS unit, or a phone which I set up at home. The Adventure Lab app requires an active Internet connection and it eats the battery. My phone used up thirty per cent of its charge in half an hour. And because the game requires an active Internet connection, I did struggle a couple of times (interestingly Gordon didn’t). In many ways the thing reminds me of a Wherigo. Perhaps this will replace them?
I’d certainly go do more of these.

Having bought three hours of parking (just in case) we found ourselves back at the car after only half an hour. It was then that I realised I’d left the car windows open. Whoops!
We said our goodbyes and headed homewards. I stopped off on the way to pick up a geocache that I’d had my eye on for some time. Having finally figured out where this one actually was I managed to claim another geo-resuscitation. Go me!!

We came home, and I realised Treacle had stopped shaking her head about. Before we left home she’d been constantly shaking her head. I’d said that if she was still doing it when we got home we’d be going to see the vet. Thinking about it, the head-shaking had stopped when we walked out the door this morning. I wonder what that was all about.
I had a spot of lunch whilst watching more “Black Mirror” then got on with my latest Wherigo project. I amazed myself; in four hours I got the thing to a stage where I can test it out in the field, and I got all the cache pages written up.
Hopefully I can have it all live by the weekend.

"er indoors TM" is currently boiling up some dinner. We’ve got cheese in the fridge and a box of wine, and Bake-Off is on the telly later.