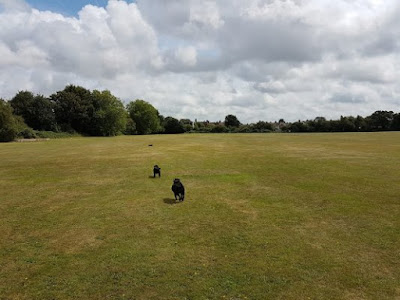 One of the dogs gave a single humungous woof at three o’clock. I wonder what that was all about?
I slept through to seven o’clock then got up. As I got up I noticed a damp patch on the duvet. Had one of the dogs jumped up with wet paws from their trips out to the garden? Had one of them had an “accident”? It turned out that Treacle has started licking the duvet (for no apparent reason).

Over brekkie I had my usual trawl through the internet and saw some new geocaches had gone live locally. Interestingly one of them was in exactly the place where "er indoors TM" had been told that geocaches weren’t allowed. I’ve mentioned before that there is a definite lack of consistency in how the geo-feds apply the rules.
Facebook was worth looking at this morning. Several friends had posted up photos from the weekend. Some had been for walks, some had been to our barby, some were on holiday in various places across the world. Being a nosey sort of person I love seeing what others are up to. Mind you it never fails to amaze me how those who’ve not been in employment for months and those who constantly plead poverty are those on the longest and most exotic holidays.

I drove over to the garage where "er indoors TM" had dropped her car. It was near where the new geocaches had gone live. I thought I might see if might get a crafty First to Find, but I couldn’t find anywhere to park. So I collected "er indoors TM" and took her to work.
My original plan had been to then drive out to hide the new series of geocaches that I’ve been planning, but "Daddy’s Little Angel TM" wanted to do a cash and carry run. I thought I might do this run before shoving film pots under rocks, but by the time I’d got over to Margate, did the cash and carry run, came back to the shop, unloaded and driven back to Ashford time was against me. I wouldn’t have had time to drive out to the back of beyond, walk five miles with film pots and dogs and be back in time to get "er indoors TM" back to the garage.
I *might* go hide those caches on Wednesday. And then again I might not. There are those that contribute to the noble art of sticking a film pot under a rock, and there are those who enjoy other people’s efforts. Over the years I’ve actually hidden over two hundred and eighty of the things. I don’t know if I can be bothered to put more out. Maybe others might care to contribute? Or maybe they wouldn’t?

So I came home, and walked the dogs round the park. We had a very good walk with no incidents whatsoever (can you believe it). With walk done I then fell asleep in front of the telly. I woke just in time to go fetch "er indoors TM" from work and take her back to the garage.
With garage run done we came home; "er indoors TM" boiled up a rather good bit of dinner and went bowling. I slobbed in front of the telly for the evening, managing to stay awake this time.

Rather a waste of a day’s holiday really…