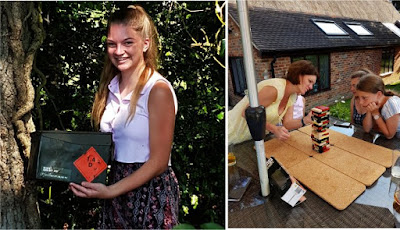 The dogs slept well last night, and as is usually the case, when they sleep well, so does everyone else.
I woke feeling amazingly chipper bearing in mind that yesterday I shifted a gallon of ale and made a serious dent in a bottle of port. When I’m at home, half a bottle of wine leaves me feeling like death warmed up but when on holiday something is very different. It was the same when I was in Turkey earlier in the year. Why is it that I can drink to my heart’s content when on holiday?

As everyone else was still snoring this morning I emptied the dishwasher, made a cuppa and had a little look at the Internet. I had loads of “likes” and comments about the photos I’ve shared on Facebook over the last couple of days; I did chuckle when I realised that the facial recognition software had tried its best but got the wrong family member.
I then found myself faced with a moral dilemma (albeit an incredibly trivial one). Someone who was new to the art of rummaging in the undergrowth for broken film pots had asked a question on a geocaching forum. Some people had offered sage advice. You might think that would have been a kind thing to have done, but several of those offering the advice haven’t rummaged in the undergrowth for over a year. I considered offering a warning to the newbies about being careful about who you listen to… but decided that was an argument I couldn’t be bothered to have. The same happens on websites about fishing. The most vociferous people on those forums haven’t been near a lake in years. I used to find the same when I was in the astronomy club, and when I kept snakes. I’m sure it is also true of baking, stamp collecting and pro-celebrity arm-wrestling. These days hobbies are dual-purpose things. You can enjoy them by either doing them or by talking about them.

The dogs woke; I took them out for their morning tiddles. As I pootled round the garden I saw what Fudge had sicked up yesterday. You’ve never seen quite so much dog-honk. It wasn’t the heat, or the excitement that had made him ill yesterday; he had just eaten *far* too much.
I programmed “Hannah” for the day, and we set about brekkie. Brekkie was rather good.

We got to the church at East Tytherley and solved a little puzzle based on a war grave before setting off on a little stroll. Although it was a hot day, much of the walk was in the shade of trees, and unlike the walk of a couple of days ago we found ourselves following clearly marked paths from one point to the next. And we even found a couple of ammo cans as well. Ammo cans are good things to find when rummaging in the undergrowth.
Mind you one of the geocaches we found was disgusting. Some idiot had put a fruit salad sweeting in the container (which is against the rules) and it had melted and sticky slime had gone everywhere. Yuk!

With walk walked we got back to the cars and had a little picnic. We had found a rather nice spot in front of the church by a giant redwood. It was rather beautiful. Within a few minutes someone drove up, made great show of checking the oil in a container outside the church, and then came over and chatted. It was rather obvious that he was the church warden and he was investigating claims that the lower orders were setting up camp on the church green.
Five minutes after he went another car drove up to us, circled round (whilst the driver watched us like a hawk) and then went away again. Having picnicked at the church we had definitely worried the locals.

The plan had us then visiting a local pub that had been recommended to us, but there wasn’t much parking there. In fact there was only parking for one car, so we found the geocache that had been put out as an advert for the place, and came back to base where we sat in the garden and drank beer and Pimms and played Jenga.

Dinner was particularly good, and with it scoffed Karl popped over the road to the pub to book a table for tomorrow. I went along in case he got lost or needed backup. Once there we had a pint and a port, and came back to find Blokus was in full swing.

Not a bad way to spend the bank holiday. As always there were photos.