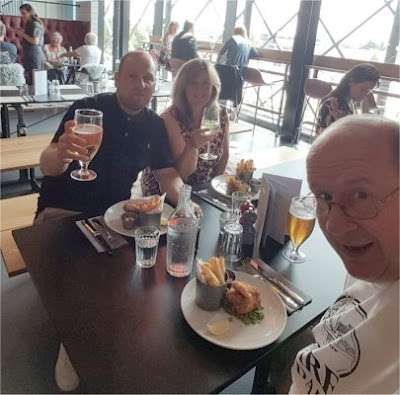 Finding myself wide awake at three o’clock I got up and watched an episode of “Orange is the New Black” in which it is becoming very obvious that the leading lady’s wife is about to pork one of the lady prison guards.
I then went back to bed and slept through till after eight o’clock.

I got up and fed laundry into the washing machine. As I had my morning shave I found that the hot tap in the bathroom sink is rather stiff. I suspect that fixing that will be a saga for the next few weeks. I then scoffed some toast and home-made jam (very tasty!). Fudge sat with me until there were no crust scraps left to be had, then he wandered off doing his own thing. Treacle and Pogo are both rather attentive dogs; Fudge has always been rather more independent.
As I looked at the Internet, Facebook told me that today was "er indoors TM" birthday. That was good of it. It has always been a standing joke that men forget wife’s birthdays and anniversaries… do they really? I never have.
I did chuckle when I saw that "My Boy TM" had used Facebook to wish his mother a happy “bithday” (!)

I also saw that the geocache I considered hunting down yesterday still hadn’t been found. Is that because the puzzle is too tricky, the tree-climb is too hard, no one could be bothered to chase the FTF, or (most likely) someone *has* already found it but hasn’t logged on-line in a thinly-veiled ruse to waste other people’s time.

Whilst "er indoors TM" got ready I hung out the washing, and pootled about in the garden. Pushing gravel about, trimming back overgrowth, pulling out weeds.
We then took the dogs down to Orlestone woods for a little wander. They behaved (mostly).

With walk walked we came home, got changed, settled the dogs, and walked up the road to the Curious Brewery. I’ve walked and driven past the place several times. But when they were in Tenterden they used to brew their beer in whiskey barrels (and so it tasted horrible), and I’d heard they weren’t cheap, so we’d put off visiting. We went today, and met "My Boy TM" there.
They’ve changed the way that they brew; the beer wasn’t bad. The food was very good. It wasn’t cheap, but then that’s not a bad thing; it keeps the likes of me (and the rest of the lower orders) out of the place.

We staggered home, and I ran out the hose pipe to top up the pond, dug the weeds out of the front garden path, and did some water feature maintenance. I didn’t think I’d done that much, but I certainly ached at the end of it all. But not too much; ironing wasn’t going to iron itself.

It’s been a rather good day off. Perhaps one of the less eventful birthdays, but not a bad day, really…