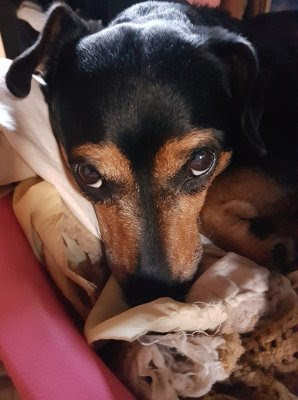 Some nights I sleep like a log even though restless dogs are stomping all over me. Other nights I see every hour even though the entire wolf-pack is settled and snoring. There’s no reason to it that I can fathom.
Finding myself again awake far earlier than I needed to be, I watched another episode of “Black Mirror”. Imagine that rather than dying you could upload yourself into a virtual 1980s where (together with everyone else that could afford it) you could pretend to be happy for ever.
As I watched the telly Fudge marched into the living room, gave me a filthy look and took himself to his basket. He then sulked at me. I have no idea what had upset him, but he had the hump and completely blanked me as I tried to fuss him.

I then spent a little while reading a Facebook page. ‼️Ashford & Surrounding Areas Crime Page‼️  is frankly terrifying. The amount of crimes that would seem to go in Ashford are amazing… *if* they really happen. Much of what is posted is frankly unbelievable, and much of the rest is people reporting teenagers who’ve committed the crime of walking down the street in broad daylight.
I went to see Fudge in his basket – he was still sulking and continued to sulk despite my best efforts.
Eventually I left him sulking and set off to work. When he has a moody, there is nothing that you can do with him. A bit like a recalcitrant teenager, really.
As I drove up the motorway the pundits on the radio were talking about Donald Trump's bungled attempt to buy Greenland. It was alleged that the whole thing has given the Chinese ideas, and that they have now put in a better offer. This has apparently gone down like a lead balloon in Washington

I drove up to Sainsbury's to get petrol. The petrol station there has been closed for some time whilst it was having a major refurbishment. It looked just the same as it always was to me. I got my petrol, brandished my Nectar card, and went in to work. Again.
My shift pattern is such that I work early, late, nights, weekends... today was my seventh consecutive day at work and I was feeling it.