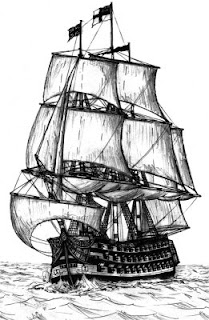 It was something of a shame that on the one night that the dogs weren’t mobbing me I barely slept. I started the night with a nightmare in which I had (somehow) been press-ganged into the Royal Navy of two hundred years ago and after sailing the seven seas singing “Yo Ho Ho and a bottle of fruit cider” I woke in a cold sweat. I dozed fitfully until one or another dog woke me by barking from downstairs at five o’clock.
I got up, put a whites wash into the washing machine, made sandwiches (now I’ve got the ingredients) and watched an episode of “Black Mirror”. It was rather good. We all get those phising emails – what happens if you respond to them?
I then hung out the washing. For all that I’d put a “white” load in, there was a massive load of coloured stuff in there. Oh well… "er indoors TM" pants didn’t go *that* pink.

I then had a quick look at the Internet. Yesterday I read one of those soppy memes on Facebook about how marvellous the NHS is and how we should appreciate all the doctors and nurses. My piss boiled when I read that. Yes – the doctors and nurses are wonderful. So are pharmacists, physiotherapists, transfusion practitioners, cleaners, cooks, biomedical scientists, podiatrists, speech therapists, cardiographers, gardeners, dieticians, porters, secretaries, med lab assistants, biochemists, radiographers, O.D.A.s. I said as much on Facebook yesterday evening. This morning over a hundred people had responded favorably.
Mind you the ones who’d posted those soppy memes hadn’t.
I had some emails – a string of “Found It” logs. More people have been out looking for those caches I hid recently. Each has now had nineteen finds in a week and a half. I call that something of a result. Mind you it also shows how few series of caches are being hidden locally at the moment for so many people to be chasing out so quickly.

As I got dressed I made a point of putting my socks under Treacle’s nose. Usually she would go running off with them; in the early morning she just gives them a glance and goes back to sleep.
As I drove up the motorway the pundits were interviewing Anthony Scaramucci.  Once Donald Trump’s biggest fan he is now his harshest critic. This morning he was suggesting that Donald Trump be removed from office on the grounds of insanity. He also made an interesting observation that for all that Donald Trump claims he’s cancelled his state visit to Denmark because the Danes won’t sell Greenland to him, that isn’t why the visit has been cancelled. The claim was made that President Trump was scheduled to give a speech at some university where Barak Obama had recently spoken, and the feeling was that Mr. Trump would only attract a fraction of the audience that Mr. Obama had.

I got to work; I did my bit. I had my peanut butter and marmalade sandwich. I’ve missed those.
As I was walking along one of the hospital’s corridors I heard two old ladies loudly talking. I think these two were deaf judging by the volume at which they conversed. As they disappeared into the restaurant one announced “Well, he’s got this penis that he doesn't want.” Haven’t we all…

I came home, and together with "er indoors TM" we took the dogs round the park. We found an ice cream van so of course we had a 99 each. I scoffed all of mine. "er indoors TM" intended to share hers with the dogs. Had Fudge not scoffed the lot in one bite she might have done so.
The walk was a bit of a disaster. It would have gone better had Fudge not tried to pork a passing precious-hound, or if Pogo hadn’t shouted at another passing precious-hound.
This is *exactly* the reason why I prefer walking the dogs round Kings Wood or Orlestone wood. The dog owners there know what dogs are like, and what dogs do. You don’t get the element which thinks a dog is a delicate child and has to be protected at all costs from every other dog.
Not that I ever wanted a dog…