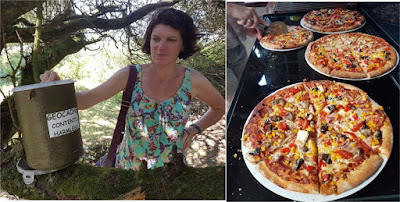 You never sleep properly on the first night in a new bed. Especially when one dog is taking up most of the available space, and the other is clattering round the house for no other reason than because he can.

As Karl and Tracey prepared a rather good brekkie this morning, I had a little look around our cottage trying to find fault. The place was so good that I felt I had to find something that the owners hadn’t provided. After an hour’s seriously struggling I gave up. They’d provided pretty much everything anyone might possibly want. So instead I just retrieved the stream of other people’s shoes that Treacle was stealing.
Brekkie was rather good; you can’t beat the Full English. And with mustard from the Ringwood brewery (20% abv!) who could ask for more?

We got ourselves organised and set off out. Our first port of call was an Earthcache which was a little lesson about the geology of a rancid swamp somewhere in the back of beyond. We got there, watched the dogs spuddle in some rather foul water, and came away.
From here we walked up the road to the Royal Oak in Fritham. It’s a tiny little place; you order the beer and take it outside to the garden. Mind you they did have ale straight from the barrel – and six barrels. It was here that we met up with Matt and Glen; we knew they would be passing so we’d arranged a little meet-up. It was good to sit and chat in the sunshine.
As we drank so the dogs both had a bowl of ice cream each. Some of the passing normal people looked at this and looked at us. If they were jealous I’d have bought them an ice cream too.
It wasn’t a bad pub, but I was rather surprised at the staff who were openly discussing (taking the piss out of and being rude about) their customers in front of other customers.

After four pints it was time to move on. Matt and Glen had to be in Brighton; we had some geocaches to find. We drove down to Stoney Cross where we had a rather frustrating afternoon. A cache there had been marked as in need of maintenance. The chap who’d hidden it wasn’t able to sort it, so we’d offered to go lend a hand. We got there to find the thing was fine.
We then went on a little stroll. There was a series of ten caches which we thought might make for a good little walk for the dogs. As we walked we saw stags and deer, horses and donkeys, and even wild boar. Geocache-wise we found all the caches – all well maintained with very accurate co-ordinates.
But as for a good little walk…
To my mind a series of geocaches are numbered. You go from 1 to 2 to 3 along well-marked footpaths. Today we went from one cache to the other following the arrow of the GPS through hedgerows and thickets; over hills and through streams. If there was a logical sensible route from one cache to the next it eluded us.
We got back to the car and was amazed to find we’d only covered two and a half miles; it felt live six or seven.
This wasn’t a series of caches. It was ten caches (good ones) which had been given numbers which implied a sequence that wasn’t there.

We came home; after a quick shower we cracked open the box of beer we’d got at the brewery yesterday. We then sat outside in the garden and had a rather good dinner of pizza as the dogs barked at everyone and everything. Eventually we gave up sitting outside; the gardener arrived and the dogs really couldn’t cope with having her about.
We came in; as Fudge snored we played Blokus, then Mouse Trap. Mouse Trap was a classic game; it has been modernised. In the new version of Mouse Trap you pull the flush of a toilet to randomly activate one of three traps (none of which actually work). We gave it twenty minutes then played Buckaroo.

I took quite a few photos today…
Posted by Manky Badger at 12:13 am