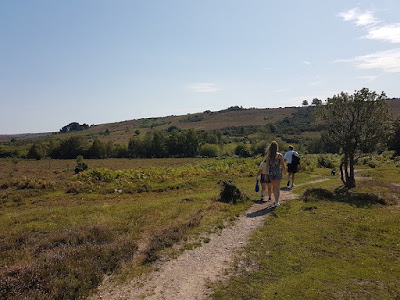 I slept rather better last night; I was woken by the sound of a dog heaving. Fortunately I was quick enough to hoik Fudge to somewhere where dog sick could be easily cleared up.
I took him outside for some fresh air; Treacle joined us. Fudge had a tiddle; Treacle went to get her stick (she brought a *huge* one back after yesterday’s walk) and she then took umbrage when I wouldn’t let her bring it into the cottage.
Being up earlier than I might have been I spent a few minutes sorting out the answers for the Earthcache we went to find yesterday. The people who’d set the thing had been in touch overnight and had been good enough to give us one or two tips of local knowledge. Which pubs to visit, and which beer to try. That’s why I love the ancient and noble art of looking for film pots under rocks; you get to find all the stuff that the tourists don’t (and not just the film pots).
As I typed out the Earthcache answers Treacle was constantly walking past showing off all the shoes she’d stolen. I find it best to ignore her; she rarely chews them – she just likes to show off. But I did get involved when she started chomping on the pieces of “Buckaroo” from last night – how did she get those?

As we pootled about getting ready for brekkie I could hear a frantic barking outside. Some silly old bat was standing at the gate with her dog deliberately provoking our dogs. I came out to round up our pups and she gave me the most filthy glare. She then made a point of standing at the gate with her dog for a few more minutes. We waited for her to clear off before letting the dogs out again. On the one hand we wanted the to enjoy the garden; on the other hand we didn’t want some silly old bat intentionally winding them up.

Brekkie was fun; we had an interesting discussion on exactly what one does with the butter knife. I found out (by trial and error) how to do it properly.
And with brekkie scoffed we drove out to the Godshill enclosure for a little walk. Beautiful scenery, a wonderful place to be; if a tad hot. As always our route was directed by a series of geocaches, and today’s route was a pleasure (unlike the chore which was yesterday’s).
About half way round we stopped off for a crafty half at a pub. We arrived to find that the Horse and Groom in Fordingbridge was staging a beer festival. I was rather pleased about this, but was rather disappointed to see what their beer selection was, Their “beer festival” featured six ales; all but one of which were so common that they are regularly available in the high street supermarket “Iceland”. The idea of a beer festival is that you get to sample the more obscure beers; “Pedigree” and “Hobgoblin” have no place in a beer festival. The pub’s bar had a better selection of ale.
It was here that I mistakenly let a herd of donkeys into the pub’s beer garden. It didn’t take me *that* long to chivvy them out again.

We came home via Tesco. As well as shopping, we needed (“needed” - not “wanted””) Baileys, Tia Maria and port. Tesco had none of them. They suggested we try the local garage who had port, and who suggested we went back to Tesco for the Tia Maria and Baileys.
As we then drove home we picked up a hitch-hiker. He was hoping to get to the village up the road from where we are staying. It was a hot day, and he was walking a long road. We couldn’t leave him. As luck would have it he asked to be dropped at a shop where we got some Tia Maria, and there was a geocache right outside the shop too. Result!

Once back at base we had a pint or two, and a rather good dinner which we ate outside in the garden. As we scoffed we watched the bats flying overhead, and as the night fell we went from bat-watching to stargazing. We peered at the stars, we chatted… the evening was only marred by Fudge throwing up. Three times.

I took one or two photos today as well…