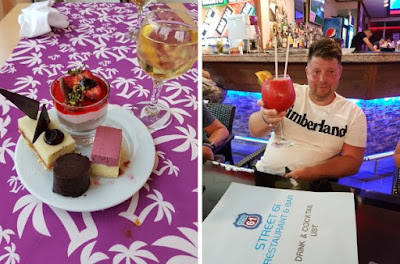 We woke to find that our room’s air conditioning was rather keen. I turned it down a tad, then stood on our balcony admiring the view, Spectacular!!
Using my WhatsApp app I messaged that I was rather hungry, and several of us went down for brekkie. I do like the all-inclusive holidays. All you can eat… I ate three brekkies. Mind you I was rather dismayed to see that I’d used up a lot of my data package. Last week when I spoke to the people at the mobile phone company they’d told me that Turkey wasn’t included in my data roaming package, but I could buy five hundred megabytes of data for six quid.
They’d got it wrong.
I could buy *fifty* megabytes of data for six quid… and in last night’s trip from the airport to the hotel I’d used forty of those megabytes.

Glen and Matt had planned to go to the market in Sarigerme this morning. We joined them. The taxi from the hotel to the village cost two quid. We had a rather interesting shopping experience. To be honest the local shopkeepers and stallholders spoil it for themselves. Everything is “cheap as chip” and “cheap like Asda price” whilst still being “not cheap shit”. There were stalls blatantly selling under the “New Look” and “Asda” brands when clearly they were nothing to do with those chains. Every stall was selling fake designer stuff. But what really boiled my piss was that nothing was priced. If you wanted to buy something you had to name a price yourself and then spend ten minutes haggling about it. I would probably have bought far more had I not had to mess about like that. I ended up buying a pair of shoes and a hat for the wedding (which I needed) and a wallet (which will go in the bin later).
And the shopkeepers haven’t really worked on their signage. What is a “boutique pension”?
Finding ourselves shopped out we stopped at one of the street-side bars. The shops were hard work; the bars were all rather good. We sat and had gin cocktails before going back to the hotel.

Once back at base we met up with more of our gang and had a little explore around the hotel complex. I topped up the gin with some vodka cocktails, and then sat by the pool for the afternoon doing crosswords with a suitably numbed head.

I went for a shower to find the maid had tidied our room, and then (after three dinners) several of us went back to the village for a little more shopping and some cocktails. Jager bombs, pina coladas, strawberry daiquiris, black Russians…it all got rather messy.
Being father of the groom I insisted on paying for the evening. Seven of us (I think it was seven?) got rather silly on only fifty quid.

Today’s photos are a tad out of order. The ones at the beach were taken on my new camera. They haven’t turned out too bad really…