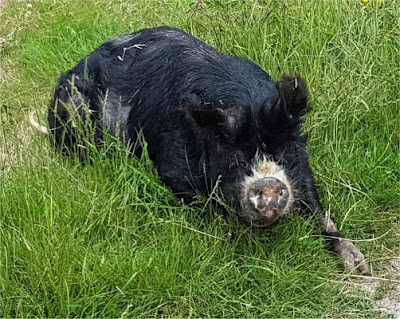 Another reasonably good night. It would have been better had I not had a flurry of text messages from six o’clock asking about "Daddy’s Little Angel TM". I messaged her over brekkie and she seemed to be on the mend. As I scoffed my toast I also had a look at Facebook and saw that the photos and videos I’d posted yesterday had received a *lot* of “likes” and reactions.
I saw that I’d had a comment on the blog entry I made on May 30th. In my world May 30th 2019 was rather dull. I walked the dogs, I found a geocache, and I had a guts ache. However the daily round of “Lovely Czech Woman” must be even more dull than mine. She’d said about that blog entry “Today, I visit your website and after reading your blog i realize that it is very informative. I'm highly impressed to see the comprehensive resources being offered by your site”. That was very nice of her, but she then went on to try to advertise various African tribal clothing. I deleted the comment; if any of my loyal readers want to buy cheap African tribal clothing I’d suggest eBay.

And I got a little bit cross. I had a flurry of “found it” logs on the series of geocaches I’d hidden in Kings Wood. When you hide a geocache you live with the constant worry of it going missing. A “found it” log tells you the thing is still there… Or that is the idea. However when I looked closely I saw that the logs I received this morning referred to finds made over two months ago. One of the logs was about a cache which has subsequently been replaced twice.
Why do people wait so long to write their electronic logs; especially when the entire process of writing them can be automated and hundreds of the things can be posted in seconds.

I got the leads onto the dogs, and we went for a little walk round the park. We’d not done that for a while; it was just like old times. The dogs were really good, we had no fights or squabbles at all. I did think we might have had an episode with one of the normal people who was flying a drone in the co-op field, but all three dogs ignored him and it.
We came home and I went round the garden harvesting dog dung. Bearing in mind I did that yesterday afternoon I was amazed at how much had been generated in the meantime. I can’t help but wonder if someone else is hoiking their dog’s turds into my garden. Surely three small dogs can’t make so much of the stuff?

Eventually the dogs settled, and (after a little pause for geo-reasons in Winchelsea) I drove down to Hastings; mum and dad wanted to see the photos of last week’s wedding. I showed them all five hundred and seventy-odd photos. They seemed impressed. Mum had put on a little bit of dinner; once we’d scoffed we said our goodbyes and I headed home… via Doleham. There was a geocache there which hadn’t been found for over two years. I parked the car, walked for half a mile, and found it wasn’t there.
As I walked back to my car I saw the way was being guarded by what I thought was a large dog. It wasn’t a dog; it was a large pig. The pig seemed happy rooting in the grass, and fortunately totally ignored me.

I came home, and spent a little while pulling the weeds from between the slabs in the front garden. It is a tedious job, but the garden looked better for it.
And then I had a look at my wardrobe and decided that I would ding out any item of clothing that I hadn’t worn in the last two years – I have four black sacks of clothes to take to the tip tomorrow,

"er indoors TM" messaged – she’d just parked round the corner. Leaving the dogs asleep we drove down to Folkestone for a flying visit. We came home via the chip shop, and with the dogs fed we watched more “Bake Off – The Professionals”. The more I watch that show the more I wonder if I might have been better off being a professional baker.
Is it too late to do just that?