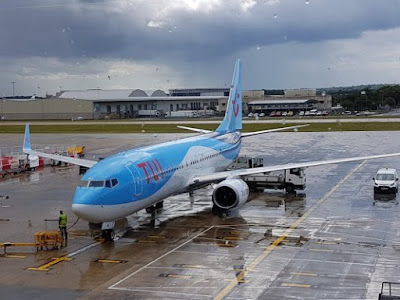 The dogs slept last night. And so did I. I woke to a dismal wet morning and over brekkie peered into the Internet. It was much the same as ever. I did chuckle when I read some of the fishing-related Facebook pages - I say “read”; “struggled to understand” might be a better description. Many of the posts to these pages are long-winded and written with no capitalisations, punctuation or spell-checking. If people are going to post stuff up on the Internet, you’d think they might want other people to be able to understand what they are writing, wouldn’t you?

With the Rear Admiral on his way to take over at home for the week, we settled the dogs and lugged our suitcases out to my car where (by a stroke of luck) Kirsty had just arrived. The three of us got all our gear into the car and drove round to the cashpoint in Brookfield Road where (by another stroke of luck) we bumped into Craig and Chris who were getting petrol. There were some very excited cheers from their families in their cars, and I think we rather upset the normal people as we all shouted excitedly at each other.

We drove up the motorway with the weather going from glorious sunshine to torrential rain (and back again) every few minutes, and we were soon at the car park that I’d booked. For “only” seventy quid we could park here all week. We got all of our gear out of the car and hurried to the coach that would transfer us to the airport.
And then I hurried back to the car – I’d left my phone behind.

There was a near-episode at the airport. As we were going to the check-in we were talking about how we would have liked to have had seats next to each other. Some chap in a uniform appeared from nowhere and said he would get us new seats and asked for our passports and boarding passes…
He might have been genuine. But I didn’t think so.
We checked in and made our way to the airport’s Wetherspoons for a spot of lunch. The queue was enormous; to expedite matters we downloaded the Wetherspoons app, ordered lunch, and as soon as we had a table number, food was with us right away.

Suitably fed we went on to the departure lounge where we (finally) got all of our contingent together. There were eleven of us travelling today, and we were together for about an hour or so until we were all split up when we boarded the plane.
I slept until take-off.

Unfortunately I found myself sitting next to a rather “normal” couple. When the trolley came round, the chap next to me wanted beer. He was told by his wife that he didn’t want beer; he wanted a nice cup of tea.
I had a small bottle of wine which clearly annoyed him.

Mind you I did have a minor result an hour later. I was first in the queue for the toilet. I was waiting for the one by the cockpit when the captain came out and asked if he could jump the queue. I told him that (quite frankly) the quicker he got back into the cockpit, the happier I would be.
We had a little laugh; I told him about the family wedding to which I was travelling. He had his tiddle and I had mine.
When I came out of the loo the stewardess was waiting for me to say that the captain had left orders with her that I should be given a complimentary bottle of champagne to celebrate the wedding. I was rather taken aback, but realised that I should share my good fortune and asked for a few glasses.
It was at this point that I realised that the normal person who had been sitting next to me was standing in the queue for the toilet and had heard of my good fortune. His eyes lit up a few minutes later when the stewardess came to my seat with the bottle of champagne and some glasses. Having ignored me for the entire flight he suddenly became very chatty; clearly thinking I was going to share it with him. I explained that there were eleven of us in our party, and I then wandered the length of the plane dishing out bubbly to our group.
What with that and the wine my head was spinning when we landed.

We were soon off of the plane and through passport control. Our suitcases didn’t take long to arrive, and after a fifteen-minute coach trip we were soon at the Holiday Village hotel in Sarigerme where "My Boy TM" and those of our party who’d flown out a couple of days ago were waiting for us. They’d got the drinks in. We had a minor celebration, and went to bed shortly after two o’clock.

We’d done nothing but travel today; twelve hours travelling. I was worn out. But I still found time to take a few photos.