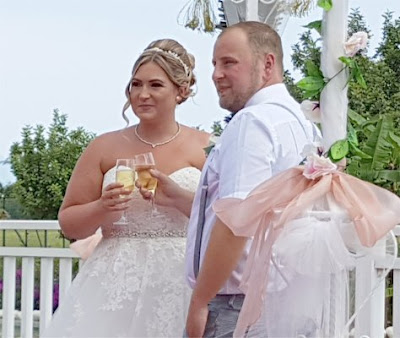 Being mother of the groom, "er indoors TM" had wedding things to do with mother of the bride this morning. Being up rather early I found sister of the bride who was also at something of a loose end, so we went for a bit of brekkie. I’d not sat outside for brekkie before; it was rather entertaining. The hotel was home to a colony of semi-feral cats who were often patrolling hoping for food scraps. When the family on the next table left, the cats jumped up and had all the leftovers. They particularly seemed to like the left over milk in the cereal bowls.

Sister of the bride had things to do. I met up with "My Boy TM" (groom), best man, deputy best man, step-father of the bride, and the ushers, and we got a taxi into the village. We had a rather good full English, and then it was time for a pre-wedding haircut.
If ever you find yourself in Turkey I can thoroughly recommend the barber in Sarigerme.
"My Boy TM" and I went first. We were sat down. We were shaved and given a haircut with razors. The barber then ran over my head and face with what I can only describe as some sort of razor wire. (It drew blood on my nose). He then covered my ears with hot wax, and shoved hot wax-covered sticks into my ears and up my nostrils. Whilst the wax cooled I had a massage. I say “massage”… if it had been a fight then I would certainly have lost. The barber gave me a proper pummelling. And when he had finally beaten me into submission he yanked the wax off of my ears, and yanked the wax-covered sticks out of my ears and out of my nose. Oh that smarted! "My Boy TM" squealed. I didn’t actually laugh, but the ladies of our group who were in the hairdresser’s next door did. They came in to point and laugh.
I had a rather good going-over and got change out of seven quid. Can’t be bad.

"My Boy TM" and I went up the road to the café where the rest of the lads were already onto their second beer. We sent the next two for their bout in the barber’s chair, then the two of us took a taxi back to the hotel. I’d offered to iron all our shirts and there had been a little confusion over hiring the hotel’s iron and ironing board. Having booked it yesterday afternoon, I was then told (by one of the ladies of our group) that the hotel reception knew nothing about my having booked it. After a lot of confusion, I decided that the sooner I went to collect the iron, the sooner I could have the argument about it. But there wasn’t any problem. The reception staff had it all in hand and insisted that they would deliver the iron to my room. Which they did five minutes later, and even sent someone to do the ironing too. But I sent him packing. I was going to iron our shirts!
It didn’t take long.
It took longer to put them on and figure out how to operate our bow ties. And it took an absolute age to come to a consensus about how our braces should go.

Pausing only briefly to unjam "er indoors TM"’s zip, pretty much all of our group (except the bridal party) met up in the hotel lobby and walked across to the wedding area in the hotel next door. Turkish law is odd; you can’t get married in the hotel in which you are staying (so why does the hotel which does the weddings have a honeymoon suite?)

The area for the wedding was spectacular; and "er indoors TM" and the other ladies had busied about all morning making it even more pretty. I had a gin and tonic to steady my nerves, and suddenly Cheryl was there. She looks lovely anyway, but she was *so* beautiful. I must admit that I’d been a tad sceptical about having the wedding in Turkey, but at that moment I was so glad that we had done so. With my sunglasses on, no one could see how much I was crying.

The ceremony went well. It was quick and didn’t drag on like some weddings do. We had the wedding cake right then (was this a Turkish thing?) and champagne. We spent a little while posing for photos; I’m told I was in everyone’s way (sorry!). We then went back to the balcony bar for drinks. And drinks. And more drinks. After a bottle of white wine, two lagers and some Malibu (that was just me!) we went into the wedding meal. Again it was a rather good venue that the ladies had made super-special. We scoffed, we laughed and joked. The speeches went well. For me the whole thing was something of a blur. I’m reliably informed that there will be videos of the speeches; I’m looking forward to seeing them.

As I smoked my (rather epic) cigar so the thunderstorm hit. Turkish thunderstorms are rather impressive.
I eventually fell into bed about half past one.

I took a lot of photos today…