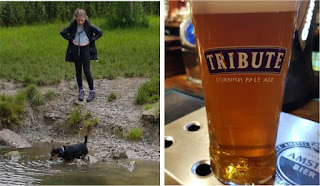 When we were away in Turkey last week our bed was *huge*. I soon forgot how small our bed is, and how much space is taken up by small dogs.
We had a few hours’ sleep. But not too much. I treated last night’s flight in much the same way as I would treat a night shift. If you sleep too much immediately afterwards you don’t sleep properly the following night, and so it goes on. If you have one tired day, then you get back into the routine of life so much quicker.
Or that is the plan…

I slept for four hours, then got up. Brekkie was toast. Just toast. When on holiday and presented with about thirty brekkie choices I went mad. Presented with frozen bread I just made toast. As I scoffed it I downloaded the holiday photos from my phone. I’d taken nearly six hundred (of which less than a dozen were that bad that I deleted).
"er indoors TM" was up fairly promptly too. She fed herself, and pausing only briefly to leave the mobile phoes at home we went out. Small dogs didn’t understand that we’d been travelling for two thousand miles and for eleven hours. Small dogs wanted a walk.

We drove to Godinton where we met Karl, Tracey and Charlotte. We’d wanted to have a walk today, but not wanted one too far from home. A quick wander round Godinton fitted the bill rather nicely.
We met up, we had a rather good walk along the series of geocaches I’d hidden a few months ago. Two weeks ago I’d replaced four of them. Three were still good; the fourth had been worried by the sheep. I’ve relocated that one and shall have to hope for the best for it.
I took a few photos as we walked.

With our walk done we went to the Chimneys in Godinton for a post-walk pint. The Chimneys is something of an odd place. Several people have told me that I should go there for the real ale selection. The place only offers one real ale. Hardly a “selection”? And for all that the place has a reputation of being one of the better pubs in Ashford, I’ve seen more obnoxious drunks there than I have in any other pub in town. There was one such kicking off as we arrived.
But we had a good couple of pints. For all that I’d drunk like a fish in Turkey, they didn’t have any decent beer there.

We came home where I made a start on catching up on writing blog entries whilst "er indoors TM" boiled up a rather good bit of dinner. For all that we’d eaten well whilst we were away, she does boil up a rather good dose of scran.
As we scoffed it we watched an episode of “Bake Off – The Professionals”. We’d had some rather special cakes whilst we’d been away. Just like they’d been making on Bake-Off. I wonder if the chefs at the Holiday Village might like to take part in the next series?

I dozed off; I woke up feeling rather ill and confused. I went to bed at half past nine…