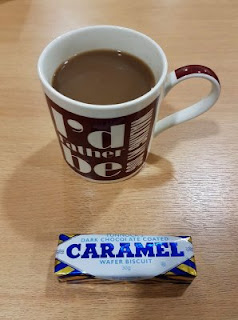 As I drove home from the night shift I listened to the news on the radio. I’ve not done this since before my holiday, and quite frankly I’ve missed nothing. I can remember when the latest Brexit delay was announced; at the time one of the leaders of the EU said that Britain should not fritter away the time, but should prepare for Brexit. But frittering of time is all that has happened.
Rather than having a quick transition of power from Mrs May to her successor, the Conservative party are taking an absolute age to do that which could realistically have been done in an afternoon. The blame for the entire Brexit debacle can fairly be laid at the feet of Boris Johnson, and having instigated the mess, he is the obvious person to clear it up.
So why waste over a month holding elections which could be had in an hour or so?

I came home, refereed a fight between Treacle and Pogo, and then took all three dogs round the park. Despite a lapse the other day, Pogo’s training seems to be back on track. As always when we walk, Fudge is the biggest problem. I can deal with Pogo’s episodes as they are usually close at hand. When Fudge blots his copybook he is usually over a hundred yards distant. Like he was this morning when he decided to declare his undying love of OrangeHead’s mate’s hound (as only a dog can)

With walk walked I locked the front door behind us, and we all went to the koi pond where there was a battle between the fish and the dogs as to who cold eat the most fish food.
I took myself off to bed and managed three hours asleep before waking.

Over a late brekkie I watched the last episode of “Celebrity SAS – Who Dares Wins” which was won by someone of whom I had never previously heard, and of whom I doubt I will ever hear again. Apparently the chap was a footballer?
As I watched telly my phone rang. It was the nice lady from the arse clinic. Last week when I had my appointment with them, they’d cut out whatever it was that they had found and had sent it off to the labs. Today they’d got the results back, and I had the all-clear. That was nice. It doesn’t explain the intermittent copious amounts of blood that I get down there from time to time; I asked about that, but the nice lady had her script, and the script said “all clear”.

I then put “Good Girls” on Netflix and did some ironing, then with ironing done I dozed in front of the telly until "er indoors TM" came home.

The day after a night shift is always rather dull…