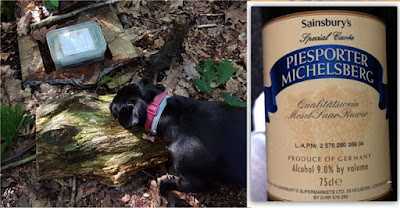 It’s no secret that I work odd hours. What with working this coming weekend, today is my Saturday. I had planned to go fishing, but "My Boy TM" was working today. I did think about a road trip to south Wales to find a particular geocache, but I couldn’t find anyone who was free to go on the adventure.

As I scoffed toast I peered into the Internet. It was much the same as it was last night. Not much had changed. There was a new geocache which had gone live a couple of miles from where I was planning on walking the dogs this morning. I *could* have gone running out to chase the First to Find, but I decided not to do so. I got one of those on Tuesday. Someone else can have the opportunity to keep their streak going.

I got the dogs organised and we drove out to Hemsted Forest near Cranbrook. There is a rather large forestry commission wood there which I thought might make for a good dog walk. We followed the well-marked footpaths, and as we went we met a few other dog walkers. One day I will go for a walk and *not* be asked what breed Treacle and Pogo are.
As we walked we met one nice lady who had half a dozen dogs in tow. We exchanged pleasantries and they went their way and we went ours. Two minutes later we encountered a rather harassed looking old battleaxe who was hurrying down the path. “Oh”, she exclaimed while looking at my wolf pack. “She didn’t take your dogs then?”. This old battleaxe then went off on a rant about the last woman we’d met. This one walks round the woods every day and (apparently) all the dogs in the woods leave their own group and follow her. The battleaxe then hurried off down the path screaming “will you b… well stop walking and give me back my dog you silly old….!!!!.”.
Realising I’d had a narrow escape we went off in the other direction.
I took one or two photos as I walked.

Quite a few of our walks are guided by geocaches. Today’s was no exception. There are two geocaches in Hemsted Forest. One has been there for thirteen years, one for a few weeks. The old one is in a bit of a state; the new one was twenty yards from where the GPS would have you think it should be. It struck me as odd that there were so few; if I lived closer I would put out a series of geocaches in those woods. There is probably space for about thirty or more. You would have thought that someone would have put some caches there.
Perhaps I might do so… it isn’t *that* far out of my way when I am working at Pembury. But I have already put out over fifty of the things this year. Is it *that* unreasonable to think that others might like to get involved in shoving film pots under rocks?

We came home; I hung out washing and put more in to scrub. With lunch scoffed I set about the monthly accounts. They are a whole lot better than they were a few short years ago, but still nowhere near what I’d like them to be. Is it *that* unreasonable to want to have far too much money?
As I looked at my accounts my phone rang. It was the local hospital who wanted to arrange my pre-surgical consultation for my nasal re-bore. I remarked to the chap on the phone that I was glad he called as I was about to put in a formal complaint about the matter. I’ve only been waiting for two and a half years for this surgery. He blathered a few platitudes, and I’ve got an appointment for a couple of weeks’ time.

With not much else to do, I spent the afternoon catching up on CPD before going to get the washing in. I then slept through heaven only knows what was on the UK Gold channel until "er indoors TM" came home.
Together we applied the monthly flea treatments to the dogs. Fudge isn’t overly bothered by it, but Treacle run in terror, and Pogo hides. You wouldn’t believe how well such a lump can hide himself. I wish I knew why – it doesn’t hurt.

We then had a rather good bit of dinner which we washed down with a bottle of plonk. Back in the day we seemingly lived off of German white wines; it was rather good.
As we scoffed and drank we watched another episode of “Junior Bake Off”. Another show in the “Bake Off” family; I quite like this one…