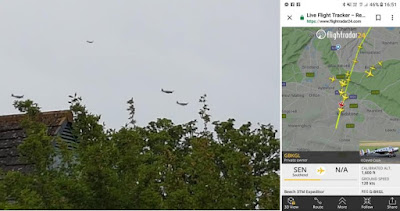 I woke with a very sore nose this morning. For all that my CPAP machine helps me sleep, it gives me such a sore nose.
I got up and once I’d fussed Fudge I watched an episode of “Bonding”, then peered into the Internet. Not much had happened overnight which was probably for the best. I did see that there is to be a re-make of that old TV favourite "Worzel Gummidge" starring Mackenzie Crook. That might actually be rather good.

I checked my emails. Bearing in mind that the new virtual geocaches were only awarded yesterday afternoon, seven of them had already been published. Some people don’t hang about.
And then I read an email which made me roll my eyes. Last week I had a petty squabble. One of the geocaches that I hid in Kings Wood had issues. I sorted the problem by putting out a new cache. This morning I was told that there was a big hole in that cache. A hole? How? The thing has only been there for a week.
What with holidays it’s going to be two weeks before I can do anything.

As I drove to work the pundits on the radio were again talking about President Trump's state visit to the UK. Yesterday the Labour leader Jeremy Corbyn was making great show of being at anti-Trump rallies having turned down an interview to have dinner with the President and the Queen on Monday evening. This morning Mr Trump revealed that Mr Corbyn had asked him for a meeting, and had been turned down. Good for Donald Trump (!)

I got to work; I did my bit. At tea break I gave up with my current e-book. I was then faced with a dilemma. Should I give it a review on Amazon? If I did it would be entitled "Crap!" and would say about how the plot was convoluted, jumping to and fro between rather confused scenarios featuring characters about which I didn't really care at all. However from what I can work out (from following various authors on Facebook) the etiquette is to only say nice things about books on Amazon. Bearing in mind that anything less than glowing praise is just potential for another argument, I kept quiet.
Instead I downloaded another e-book which (so far) seems far better.

At half past two we all peered out of the window. A squadron of various planes was flying over Maidstone on its way to the D-Day remembrance events. By quarter to three we were wondering what had happened. We had a look at the Internet and found the flight had been delayed. Eventually they came over shortly after four o’clock. Several of us took a late tea break I took a few photos as the planes flew over. It was a surprisingly good little spectacle.

I came home. We didn’t take the dogs out. It was raining and I didn’t feel very well. I spent a little while fiddling about preparing my geo-virtual until "er indoors TM" said dinner was ready. We scoffed a rather good bit of scran whilst watching the last episodes of “Ghosts” and “Young Sheldon”.
I really should have an early night… I’m feeling a bit iffy…