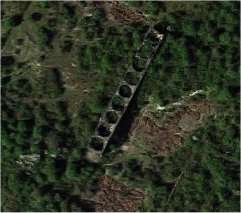 After a rather restless night I woke to a cold morning. I shared the crusts of my toast with my dog whilst watching "Dad's Army" then scraped the ice from the car.
Mind you I'm not complaining; I've not had to do much ice-scraping this winter.

Being a geo-calendar day I set off down the A20. A few months ago a fellow hunter of Tupperware hid some sandwich boxes along the A20 as drive-by finds. They are quite handy for filling the geo-calendar.
I made a quick find in the frozen mud then carried on to work. As I drove the pundits on the radio were talking rubbish as usual. There was some bigoted idiot who was ranting about how important it is that everyone should be free to pursue their own religious beliefs. Even if those religious beliefs involve reducing all women to little more than slaves, and/or embarking on genocidal wars because someone else's crackpot religion is at odds with your own.
This chap was crystal clear on this point, and was so earnest in his belief. It *really* boils my piss that they give air-time to these crackpots. And it boils my piss even more that in the twenty-first century people still have unshakable faith in such stark staring nonsense.

I got to work rather earlier than I might have, and spent a little while reading my Kindle before starting to do my thing. I then spent an embarrassing five minutes trying to identify a strange noise emanating from a fridge only to find the noise was actually emanating from a seagull on the roof outside.

As the day wore on I found myself wilting. I thought about going home sick but decided against it. Mind you I was rather glad when home time came.
Once home I took "Furry Face TM" round the block, had a quick shower and whilst "er indoors TM" took some luggage round to "Daddies Little Angel TM" I dozed for a little while. The original plan was gather with the clans in Folkestone this evening but it didn't happen; which was probably for the best. I wasn't really up to going out.
I spent a quiet few minutes solving a geo puzzle only to find the thing is miles from anywhere. Oh well, I expect I shall wander in its general vicinity at some point...