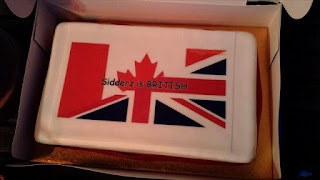 I woke in a cold sweat shortly after 6am. I had been having a rather odd dream in which the King of Germany had invited me on a cruise around the Isle of Wight. Half way round the voyage the ship ran out of lager and things became particularly nasty. I wonder what that was all about?
I got up and had brekkie whilst watching the SkyPlus box's offering. "Dad's Army" usually amuses. Corporal Jones was having problems with people sneering at his brawn. I then had a look-see on-line. Social media wound me up (as it often does) with so many people pretending to have some Irish heritage so they can claim some sort of connection to Sant Patrick's Day.
Mind you I did see that "Gotham" has been given a third season so there was some advantage in tuning in to Facebook this morning.
I had a look at the BBC's analysis of yesterday's budget. From what I can work out I shall be £6.63 better off each month from now on. A minor result, I suppose.

I popped the led onto "Furry Face TM" and we went for a walk. Usually on a day off we'd collect "Daddies Little Angel TM" and "Stormageddon - Bringer of Destruction TM" for our walk but they had a better offer.
As we walked down to Park Farm we saw what looked like goldfinches. I've not seen them round here before. We also saw small children who cried in terror at the sight of my dog. That's happened two dayss running; what's going on.
We replaced a missing geocache in Park Farm, and checked on one which I thought was fine only to find it wasn't.
On the way back we had a phone call. "Daddies Little Angel TM" s plans had gone west, and so she and "Stormageddon - Bringer of Destruction TM" were up for a walk. So we carried on up through Willesborough Dykes to find them. Together we had an hour's stroll; as we walked we met a dog which looked not unlike my one. Although the same age he seemed half the weight. This prompted me to weigh my dog, so on our way home we stopped off at Pets at Home where I popped "Furry Face TM" onto the scales. On the one hand he's lost 0.2Kg since his last weigh-in. On the other hand he is still three kilogrammes overweight.

I treated myself to KFC for lunch. After my "intestinal adventures" earlier this week it was quite nice to be feeling hungry again. And being at a loose end I then watched this week's episode of "Extant". This show blows hot and cold. It is quite enjoyable... but would any politician *really* set a load of killer robots loose? Apparently the show has been cancelled..

I drove the baby car seat round to "Daddies Little Angel TM" then collected "er indoors TM" from work and we drove up to Maidstone. There was a geo-meet this evening to celebrate one of our number's having obtained British citizenship.
We arrived to see a friend marching up the hill; obviously on a mission. Had a new geocache gone live for the evening? Pressing refresh on my NeonGeo app I chased after Matt. Sure enough he was chasing a First to Find. And I was chasing him. Rather cheeky of me, but a joint FTF is never a bad thing.
We then went back down the hill to the pub in which everyone was meeting. It was good to spend a little while chatting with friends.
The plan was to have had dinner in the pub but.... Call me an old skinflint if you will, but the price of one meal in the pub was more than the price of two meals (plus desserts) in McDonalds. And I like McDonalds. So once the meet was over we went for McDinner.
The chips were cold. "er indoors TM" took them back...