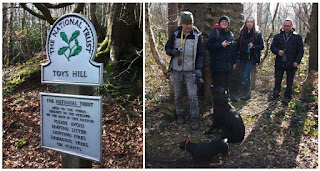 After yesterday's exertions I slept like a log. Unfortunately the rest of the household were feeling it too. If it wasn't the snoring of "er indoors TM" keeping me awake it was that of "Furry Face TM" .
I scoffed my raspberry curd over brekkie, then looked at the geo-map to make plans for next weekend. If anyone fancies a walk round Surrey next Sunday do drop me a line. I tend to forget to invite people; it's not deliberate, just absent-mindedness.

I then went and woke my dog (he needed his brekkie) and we drove up to Toys Hill. Being a geo-calendar day and needing to use up my annual leave, a week or so ago I asked if anyone fancied a small geo-wander. Some friends were free, and so five of us (and two dogs) met up in the car park at Toys Hill this morning. I'd had a look on the map and seen two seperate series of geocaches and a couple of stand-alone caches in the area. So last night I'd studied the ordnance survey maps and worked out what seemed to be the easiest route to walk to find all fourteen geo-targets.

Our walk started off well enough, we kicked off with a visit to an old tower which is now used as a home for bats. From here we had to find the road and cross it. A simple enough proposition?
Through the wonders of pinpoint accuracy sat-nav positioning it soon became painfully obvious that the footpaths marked on the maps toward the north of Toys Hill bore no relation whatsover to the footpaths that are actually there. For our second and third geo-targets we followed the sat-nav arrows blindlly through thickets and jungles. Fortunately for my nerves by the time we found our fourth sandwich box we were back onto footpaths. We were grateful for that...
We soon found ourselves walking through the National Trust land around Emmetts. Very unusually we found some toilets as we walked. We took advantage of those. From Emmetts there was quite a bit of upping and downing as we went along; I didn't realise that Toys Hill is one of the highest points of Kent.
We saw some rather spectacular views, we found a ram-pump, and for a short while even acquired a third dog.

After five miles and three hours we found ourselves back at the car park. It had been a rather good walk. We said our goodbyes, and made our various ways home. Once home I set the washing machine doing its thing and watched a rather thought-provoking play on the telly. If the chance arose would you steal thirty five thousand pounds?

I took some photos whilst we wallked. With lunch scoffed I put them on-line, then dozed on the sofa until "er indoors TM" came home. She boiled up a rather good bit of tea, then fought with the printer. Apparently wireless printers don't like Windows 10. She stressed with it until she gave herself hiccups, then went off bowling (as she does on a Monday).
I then spent the rest of the evening watching telly. Monday is a good telly night...