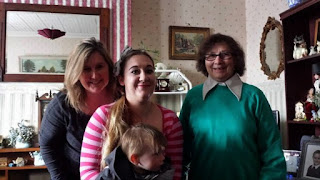 After a good night's sleep I was rudely woken by a wet nose in my left armpit. I dozed for a few minutes as "Furry Face TM" made himself comfortable. However the call of the toilet could not be resisted. And having got up for my early-morning tiddle I went back to find my dog had made himself comfortable having spread out across what was once my side of the bed. So I had a bit of brekkie and had a look on-line.
As you might expect there was quite a bit of stuff about Mothers Day. For some strange reason I found myself getting rather wound up about all the posts from dog owners today. Perhaps I'm wrong (I usually am) but Mothers Day isn't a dog thing. Did anyone else notice all the women wishing themselves a happy Mothers Day because they have a dog?

I had a little look-see on-line. I struggled somewhat. Ever since using AVG's PC tune-up last night my lap-top has become slow to the point of being unusable. There really was a delay of two to three seconds for every mouse click or keystroke to register.

We eventually left home an hour later than planned and having collected "Daddies Little Angel TM" and "Stormageddon - Bringer of Destruction TM" we drove down to Hastings. First of all to see mother-in-law and then on to see my mummy to do the Mothers Day thing. Whilst great grandmothers clucked over great grandson I took my dog for a quick walk then dozed for most of the afternoon.

We left Hastings just as the snow flurries were starting, and got home just as the neighbours who hate us started practicing playing their piano. Again. She first got the thing over ten years ago and every afternoon she spends over an hour playing scales. I think it is fair to say that in that time she really has shown absolutely no improvement whatsoever. In one of his rare talkative moments him next door once told be that she plays the piano badly purely in order to annoy him.
Judging by how stressed he usually seems it looks like her ploy is working.

I must admit that for all I quite liked doing the family thing today I rather missed our usual Sunday walk. I spent a little while looking at the geo-map looking for walks for the next few weeks. "er indoors TM" then boiled up a rather good bit of scoff, and we watched episodes of "Benidorm" until I felt myself nodding off.