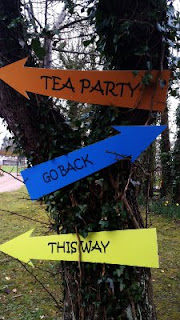 I wouldn't say I drank too much yesterday but... There's no denying that much of yesterday evening was a blur. I woke feeling like death warmed up at 3am. I do that after a serious drinnking session. The cure is to get up and drink a pint of water. So I did that, but then couldn't get back to sleep. So I got up again and had brekkie at 4.30am. Sometimes if I get up for an hour I then can sleep afterwards. So I got up, had a shave, posted the photos from yesterday's wedding and went back to bed.
I dozed fitfully until 7am when "Furry Face TM" declared "Red Alert". I knew Lacey was going to be with us today; but no one told me she was arriving at 7am. But I didn't mind. We spent an hour or so watching stuff on the Nickelodeon Channel.

Lacey seemed content watchinig telly and "Furry Face TM" was restless so I took him round the park. For once the place wasn't heaving with the Saturday morning jog-a-thon. He behaved himself (mostly) and as we walked we saw a Jay flying past. You don't see them very often in Viccie Park.

We then drove down to Westernhanger Castle. There was an "Alice iin Wonderland" themed day. We thought Lacey might like it and I was sure that I would.
We were wrong.
Personally I was rather disappointed to find that the event was aimed at the pre-school age group. It is possible we might have enjoyed it more if we had been able to hear anything of what the characters in the show were saying; I wouldn't say that I wanted my money back (mainly because "er indoors TM" had paid) but the entertainment was twenty quid down the toilet.
I saw the show got rather slated on social media too. A shame, really. We had such high hopes.

Mind you there were several stalls selling all sorts of stuff. We were rather taken with the magic stall and we all came away with magic tricks and magic wands and stuff. Pausing only briefly to have photos taken withh Minions we then went to the American Diner for a spot of lunch where Lacey started amazing us with her magical feats. I must admit I've always been taken with magicians, and I can do the bamboozing the public by talking loud and fast and confidently. I wonder if I might become a magician?

Cheryl joined us at the Diner, and we then went round to Asda to get the makings of dinner. Narrowly missing a "CrackWatch" opportunity we came home for a cuppa, made a few plans for tomorrow then drove round to Dan and Cheryl's. We played magic tricks, had a rather good bit of diner, then I slept through Ant and Dec on the telly.

A really good day all things considered. I took a few photos of what we did...